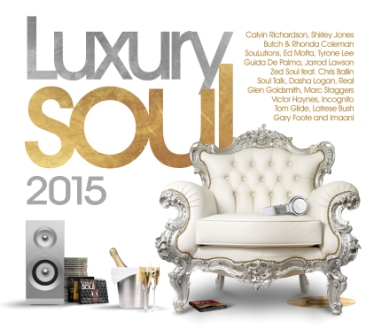 Each year Expansion Records issues two state of play modern soul compilations. Year end sees the eagerly-awaited ‘Soul Togetherness’ set while January welcomes ‘Luxury Soul’ – a retrospective of all that was good in the modern soul world the previous year and a tie in with the sell-out annual bash at the Blackpool Hilton.

Our spies at Blackpool tell us that the event was as successful as ever with the resident DJs playing out the very best modern, smooth and sophisticated soul. Naturally, the 3 CD, 35 track accompanying album reflects the quality of their playlists.

Most of 2014’s big modern soul tunes are included – notably the pairing from the DSG label…. Soulutions’ ‘Philly Line’ and Neo’s ‘Your Smile’. There’s also plenty from the Expansion stable too – stuff like Muzart’s ‘Move (Yeh, Yeh)’, Tyrone Lee’s ‘What Took You So Long’ and Shirley Jones’ comeback track, ‘Because You Love Me’. Music too from some US big hitters like Calvin Richardson, Eric Roberson, Jarrod Lawson and Angela Johnson while it’s good to have Shaun Escoffery in the mix too.

As ever the collection offers a smattering of older material like Keni Burke’s ‘Indigenous Love’ – taken from his 1998 ‘Nothin’ But Love’ album and the delicious ‘Dondi’ from Brazilian star Ed Motta. You also get some album exclusives, notably the pacey insistent dancer ‘You’ from Soultalk featuring the vocals of Gary Poole.

Highlights? Well it would be foolish to cherry pick… like Mr Gump’s fabled box of chox everyone will have their own favourites, but we keep coming back to the cover of Mystic Merlin’s ‘Just Can’t Give You’ from the Diplomats of Soul with Noel McKoy on vocals and Marc Staggers’ ‘It’s All About You’, a sad reminder of just how fabulous a certain Luther Vandross was.