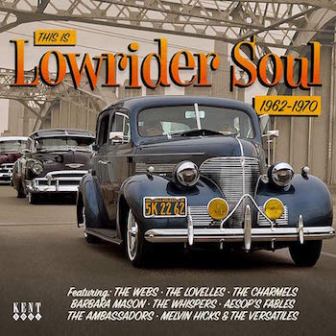 If there’s one thing most soul fans love it’s categorization! They love to put their music into neat pigeon-holes, genres, sub divisions, flavours, all kinds of everything! In something like 50 years of writing about soul I thought I’d come across every soul sub genre… how wrong I was! You see those awfully nice people at Ace/Kent have just come up with a new one (well, new to me!) … “lowrider soul”. It seems that lowrider soul began in Mexican, Central and South American migrant areas in and around East Los Angeles. In their clubs and bars, they preferred to play and listen to a very particular kind of soul – sweet and nostalgic love ballads (modern people, I think call ’em “slow jams”!). The “lowrider” tag come from the fact that many members of this slow soul loving community often cruised the streets (windows down, radio playing) in classic US autos – lowriders! However, the best way to define a music genre is with the music- not with words, and here Ace/Kent offer 24 wonderful examples of lowrider soul. We can be sure that these sonic definitions are bob on because the album has been compiled by a pair of genre experts…. UK DJ Sean Hamspey and California’s Ruben Molina. Sean runs the Diggin’ Deep soul label while Ruben, who operates in the lowrider heartland (South California) , has written the definitive book on the genre and fronts the Southern Soul Spinners DJ collective.

So, to the music –as the man said, it’s what’s in the grooves that counts. However, it’s hard to know where to start because there’s so much soul excellence here – so we’ll cop out and begin with the biggest name amongst the 24… William Bell. His contribution is his 1965 Stax outing ‘Crying All By Myself’. On it he’s backed by the Astors (of ‘Candy’ fame) and while we’re banging on about genres, I guess we could pigeon-hole this as “deep soul”. There are several more “deep” items amongst the 24 (notably Reuben Bell’s ‘It’s Not That Easy’ and the Webs’ ‘It’s So Hard To Break A Habit’) but by and large the music here is mainly sweet and smooth – typified by Barbara Mason’s classic ‘Oh How It Hurts’. Other highlights include the Charmels’ doo-wop flavoured ‘I Wanna Chance’, ‘As I Sit Here’ from an early incarnation of the Whispers and ‘No Doubt About It’ from the massively underrated Esquires.

To conclude, let’s go back to genres, another man (same as the other one!) said there are only two kinds of music… good and bad. ‘Lowrider Soul’? All good!