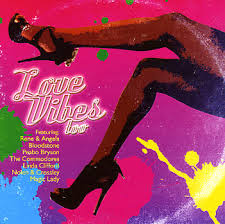 Expansion’s latest soul compilation is the follow up to last year’s successful first ‘Love Vibes’ set. That one was put together by label main man, Ralph Tee, along with Steve Cole and Paul Clifford and their aim was to resurrect some classic late 70s/ early 80s sounds that over the years might have become neglected. The same team replicate that philosophy on this welcome second volume and again the 17 tracker proves that soul merit and danceability aren’t limited to ridiculously rare records or obscure album tracks. As with volume 1, the compiling trio prove that well-known, even “big”  names are capable  of cutting the mustard. (Daft comment that, isn’t it ? How else did they become well-known and “big”… but maybe amongst soul snobs it just needs stating!)

With the odd exception, all the cuts here are reasonably easy to find and most are busy, beaty, bustling dancers typified by the lovely ‘Ain’t Nothin’ But A Party’ from Taste Of Honey. Produced by the late George Duke, the irresistible foot-tapper proves there was more to the girls than ‘Boogie Oogie Oogie’. Other featured “names” on the set include The Commodores (how many soul snobs would admit to digging Lionel and the boys?), Linda Clifford, Narada Michael Walden and Peabo Bryson whose ‘Paradise’ is a little more energized that what we’d except from him. It’s a sophisticated energy, though, but would you expect anything else with Johnny Pate at the controls?

The set boasts two slightly more down tempo moments. Vicki Sue Robinson’s ‘High On Your Love’ and Sidney Barnes’ ‘Love In The Moonlight’ are no way ballads but they’re a tad more restrained than the album’s other 15 inclusions. However, the slight tempo change only enhances the overall mood of a great collection.