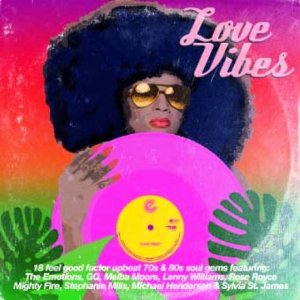 Kings of the modern soul compilation, Expansion, have just released their latest offering – and it’s just a touch different to their usual output. No, they’ve not ditched their penchant for big, modern soul tunes nor have they allowed the quality of the selected material to dip in any way. You see, compilers Steve Cole, Paul Clifford and main man, Ralph Tee have gone for a whole bunch of cuts that aren’t obscurely rare or maddeningly expensive. For ‘Love Vibes’ the trio have chosen 18 songs from the late 70s/early 80s that are reasonably easy to find – classic oldies and long-forgotten album tracks – all unified by their feel good sound… up-tempo and optimistic, typified by the cut that gives the album it’s title – ‘Love Vibes’ from The Emotions. Produced by Maurice White, it’s taken from their 1978 long player ‘Sunbeam’ and it’s so vital it could be a recent recording!

Other goodies include 1980’s ‘Reach For My Love’ from Patti Brooks, The Spinners’ ‘Love Is Such A Crazy Feeling'(Marcus Miller on bass here) and Heatwave’s ‘Razzle Dazzle’. They’re all long-forgotten gems and Cole, Clifford and Tee are to be congratulated for resurrecting them. Other featured artists include GQ, Melba Moore, Mighty Fire, Stephanie Mills, De Barge, Rose Royce, Tavares, Instant Funk, Michael Henderson and Lenny Williams. The Tower Of Power man’s offering is 1979’s ‘When I’m Dancin”. It comes from his ‘Love Current ‘album and is irresistible. Interestingly, Lenny’s still making music and recording (go to our reviews archive for an appraisal of his latest album) but this gem (some 30 years old) could sit nicely on his newest collection. Quality, as all soul folk know, never goes out of fashion and here there are 18 high quality modern soul artefacts.