VARIOUS: Lost Without You (Kent) 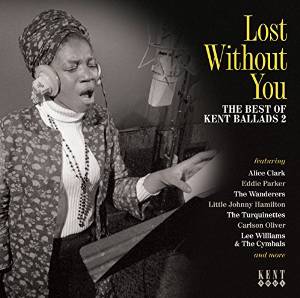 ‘Lost Without You’ is Ace/Kent’s second compilation of soul specific ballads and the 24 tracker covers all the bases – there’s music from right across soul’s golden era (early 60s – early 80s) and stylistically you can go from the lushly orchestrated ballads from soul’s urban hot spots to the sparser, rawer sounds of the rural communities of the south.

The earliest track on offer is ‘Take Another Look’ from the Turnquinettes. Recorded in 1962 in New Orleans, it’s truly mournful and there’s a strange (French, even) feel to the orchestration. Other 60s gems on the set include ‘Stay Away’ from LA’s the Turnarounds (a touch of the Knight Brothers about this previously unissued tune); Lorraine Chandler’s dramatic ‘Lost Without You’; and the Drifters-flavoured ‘After He Breaks Your Heart’ from The Wanderers, for whom Ray Pollard was the lead singer.

There are fewer cuts from the 70s but there’s real magic from John Edwards on the easy-going ‘Messing Up a Good Thing’ (a quick listen makes it obvious why the Spinners recruited him) and Ty Karim with her version of the James Taylor evergreen ‘Don’t Let Me Be Lonely Tonight’. There are just two 80s cuts but both Jimmy Scott’s ‘Sure Thing’ and Mary Love Comer’s ‘The Price’ sit easily with the earlier music. Ms Comer’s offering is particularly strong and proves she’s much more than ‘Sandbox’!

By now you’ve probably worked out that the album boasts few big “names”… though a number of the artists will be familiar to the soul cognoscenti. Amongst that revered number is the unlucky Lou Johnson. He’s represented here by his 1964 Big Hill recording of Bacharach and David’s ‘The Last One To Be Loved’. Johnson, we all agree, was a superb soul stylist (why else would Bacharach choose to work with him?) and he cut countless gems but, sadly, major success always eluded him. Major success seemed to have passed by almost all the artists here, but at least we can enjoy their legacy.