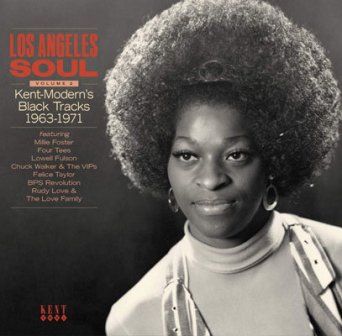 The latest compilation from UK collectors’ label Ace/Kent is another dip into the archives of US label group Kent/Modern. Kent/Modern (for whom the UK’s Kent label is named) was founded in Los Angeles in the forties by the Bihari Brothers (Saul, Jules and Joe) and till its demise it released countless R&B and soul gems on names big and small. During the 1990s UK’s Ace Records (who’d previously licensed plenty of Kent/Modern material) bought the whole catalogue and over the years they’ve sensitively reissued plenty of the Bihari’s material.

This new album offers 24 cuts recorded between 1963 and 1972 and represents a cross-section of black music genres -soul, R&B, blues, gospel, funk and jazz tinged flavours sit cheek by jowl as do familiar names and the not so well known. The soul cognoscenti will recognize artists like Johnny Copeland, Lowell Fulson, Clay Hammond, ZZ Hill, Vernon Garrett and Felice Taylor. They may be less familiar with people like Jimmy Bee, the Other Brothers, the Four Tees, Earl Foster and Bobby John – who all came to the Biharis looking for fame and fortune but found both elusive! Indeed contributions from Jeanette Jones, Earl Foster and Chuck Walker represent just one side of their only 45! In the case of Walker we’re treated to both sides of what is probably his only single. The cuts are the rough hewn ballads ‘I’ll Be Standing By’ and ‘Peace Of Mind’ which top and tail this collection. On both the singer is backed by the “the VIPS with Bobby McVay” and though another Chuck Walker single exists… a 1973 outing, the Ace/Kent ‘tecs can’t be sure if it’s the same singer. His “unknown” status, however, doesn’t make his contribution to this album any less worthwhile than, say, ZZ Hill’s Bobby Bland –influenced ‘Where She At’.