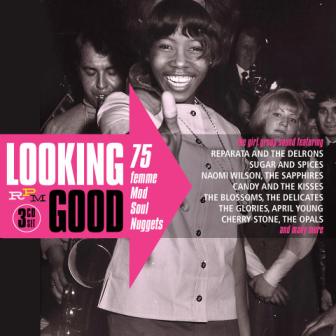 Reissue label RPM’s latest epic compilation is a 3 CD, 75 tracker that pulls together rare and collectable femme soul and pop sounds from the 60s. The collection’s strap line suggests that the tunes were all mod favourites. Well, anyone who was a genuine, first time around 60s mod (like this writer) will tell you that few of these 75 tunes were actually mod anthems (most were actually unavailable in the UK back then, so physically couldn’t have been anyway). But as is often the way with these retrospectives the complier, Glenn “Joe Boy” Gunton (born in 1960 according to my research … and so, far too young to be a 60s mod) has worked with a sort of artistic license and blithely and blatantly claims that what we have here is a mod treasure trove!

Well let me say I don’t ever think that cuts like Flo Ray’s ‘I Promise’ or Kathy and Larry’s ‘Magic Island’ would have ever cut it with 60s mods –far too poppy and banal… and that goes for a lot of the material. Why, there’s even an offering from country singer Skeeter Davis! That said there are some “real” mod tunes amongst the 75. Candy and the Kisses ‘The 81′ and Barbara Lewis’ Make Me Your Baby’ spring to mind. Great cellar club cuts in the 60s and still sounding good today.

No, what we have here isn’t a mod collection at all; rather, we have a decent assemblage of rare 60s “girl group” recordings and the set will make a great addition to any collector’s archive. There’s lots of “collectables” from artists like The 3 Degrees, The Blossoms, The Ladybirds and the Sapphires whose 1964 ‘I’ve Got Mine, You Better Get Yours’ (an early Kenny Gamble/Jerry Ross song) is a real standout.

The material comes from a set of dependable labels – Columbia, Challenge, Era, Hickory and Okeh amongst them… so you know we’re talking quality. The set comes in an attractive box with adequate sleeve notes though – oddly, I think, the cover features a picture of Mille Small – of ‘My Boy Lollipop’ fame. Why? She’s wasn’t a mod favourite and the set features no reggae or ska at all. Probably just poor research from the young shaver complier Gunton, and, sadly, its little things like that which devalues what is essentially a great compilation.