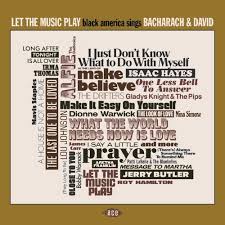 Ace’s latest album in their “Black America Sings” series is an absolute corker. Why? Well, the songs the singers are singing are all by Burt Bacharach and Hal David and if that’s not enough then the performers number artists like Irma Thomas, Isaac Hayes, Bobby Womack, Gladys Knight, James Carr, The Drifters, Jerry Butler, Cissy Houston and Aretha Franklin!

The Queen Of Soul’s offering is her definitive reading of ‘I Say A Little Prayer’. Aretha released the tune in 1968 and it did much to introduce her to an audience wider than the soul cognoscenti who’d latched on to her years earlier. Aretha, as we know, takes the tune right down to Soulsville and it remains a spine-tingling classic some 45 years later. It’s always been a poignant song, the more so when you realize that Hal David wrote the lyric from the perspective of a woman whose man was away fighting in Vietnam. Dionne Warwick’s lighter, poppier version doesn’t have the same gravitas but as she was Bacharach and David’s main muse it goes without saying that she’s represented on this 24 tracker. Her contribution is the original, demo version of ‘Make It Easy On Yourself’. The song, of course, was then “given” to Jerry Butler who had the Stateside whit with it while in the UK it was a smash for the Walker Brothers.

Bacharach and David’s male muse, Lou Johnson, gets an outing here too. The LP offers his rendering of ‘The Last One To Be Loved’ while the tune usually most associated with Lou, ‘Always Something There To Remind Me’, comes in a 1967 version from Patti Labelle and the Bluebelles. And the fact that the compliers haven’t always gone for the obvious versions of the songs is one of this album’s added attractions. Amongst these lesser known recordings we get Willie Tee’s version of ‘Reach Out For Me’, Brenda and the Tabulations version of ‘Don’t Make Me Over’, Nina Simone’s version of ‘The Look Of Love’ and ‘One Less Bell To Answer’ from Gladys Knight and the Pips. It’s a soul tour de force, only bettered in that department by the album’s final cut – a mesmeric reading of ‘A House Is Not a Home’ from Mavis Staples. Yes, Dionne Warwick’s original is stupendous, Luther’s reconstruction is fabulous, but Mavis’ reading is without doubt the most honestly soulful. It’s a perfect conclusion to a great compilation….great songs, great artists, fabulous performances… what more do you want?