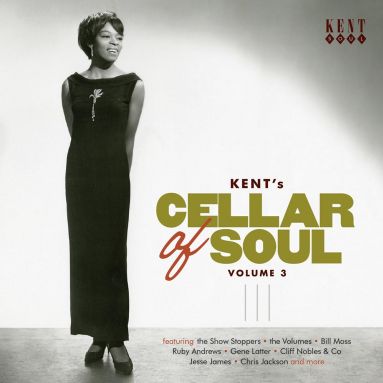 Long-time soul fans will have fond 60s memories of a great series of compilation LPs called ‘Bell’s Cellar Of Soul’. The albums (now very much collectors’ items) were stuffed with rare and esoteric soul cuts from smaller, more independent American outlets. One of the brains behind the series was a young soul fan called Trevor Churchill who helped introduce we soul-starved Brits to people like James Carr, Betty Harris, Jimmy Radcliffe, Mighty Sam, the Ovations and Clifford Curry. Years went by and Trevor eventually became one of the driving forces behind Ace Records and through their Kent imprint he re-introduced the ‘Soul Cellar’ concept…. and as you can see from the title up top this “new” Kent Soul cellar series has just unleashed its third volume.

As with the original Bell series (an indeed the first two Kent volumes) the idea here is not to be over-esoteric, smart, clever or anoraky… rather, the concept is just to offer a cross section of 60s soul that celebrates the joy of the genre; and boy, how they succeed! Here we have 26 wonderful soul shots that really do capture the spirit of the 60s. Many of the featured tunes were actually released in the UK in the 60s. But on small labels like Action, Soul City, Direction and Pama they never really entered the mainstream becoming underground mod classics… Thelma Jones’ original version of ‘The House That Jack Built’ is a great example of what I mean. Released here on Dave Godin’s Soul City label, if you’re sitting on a mint copy, you’re sitting on a fortune. My guess though is that if you have a copy, it’s been played to death… that’s what you do with great music! The Ad Libs mournful ‘Giving Up’ is another Cellar gem that was unearthed by Dave Godin. Released on the Soul City off shoot, Deep Soul, it introduced UK soul folk to that most troubled and turbulent of soul sub genres.

‘Giving Up’ is one of the few slowies on the set. Most of the selections are up-tempo (in the 60s we were mainly optimistic and why not!). So enjoy again stuff like The Platters’ ‘With This Ring’, the Ikettes’ ‘Peaches And Cream’, James Carr’s ‘Freedom Train’, the Esquires ‘And Get Away’ and (a personal fave) ‘The Horse’ from Cliff Nobles &Co. A real 60s classic instrumental, poor old Cliff doesn’t get a look in. The tune (played by an ensemble that went on to become MFSB) is the backing track to Cliff’s failed ‘Love Is All Right’. ‘The Horse’ is a huge memory jogger like everything else on offer.

Look, if you weren’t around in the golden days of the 60s, forget all the guff you’re told about that decade from musicologists and historians too young to really know; instead drop down into this Soul Cellar to discover what the 60s UK underground soul scene really sounded like. Fab!