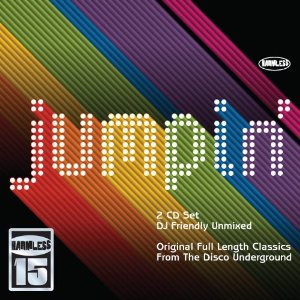 The wonderful, little (but perfectly formed) Harmless label continues its 15th anniversary celebrations with an equally wonderful new ‘Jumpin” compilation. Their first ‘Jumpin’ was released in 1997 and the idea was to celebrate the whole retro disco scene. A second volume in 1998 spawned numerous similar ventures from other labels but few came near to the comprehensive nature of Harmless’ debut duo. Here – at long, long last – we have the third volume in Harmless’ take on that scene and what the compilers have done is focus tightly on one decade – 1976-1986…when the original sounds of soulful glitter ball disco were evolving and mutating under pressure from electronic music. The Harmless bods have sounded opinion and scoured the vaults to come up with a 24 tracker that’s stuffed with in demand titles (many new to CD) from landmark labels like Salsoul, Red Greg, Gold Mind, West End and dear old Philadelphia International.

Everyone will find different favourites here and I guess what appeals will depend on your soul entry point and how receptive you were to the infiltration of new instrumentation into soul in that period. For instance, I think it works admirably on Terri Well’s version of ‘I’ll Be Around’ but fails quite miserably (and soullessly) on Yarbrough and Peoples’ ‘Don’t Waste Your Time’… but then again, a good song will always be a good song. Other faves on the set include a pair from later period Harold Melvin and the Blues Notes (‘Don’t Give Me Up’ and ‘Today’s Your Lucky Day’) and the little Barbara Mason soap opera that is ‘Another Man’. Other featured artists include the Salsoul Orchestra, Love Committee, Jean Carn, Skip Mahoney, Fonda Rae, The Gap Band, Leroy Burgess and Loleatta Holloway. Between them they make a great little snapshot of a particular soul era and newcomers and veterans alike will find lots to treasure.