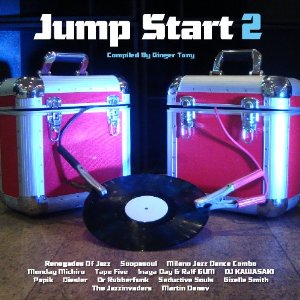 One of last year’s best compilations of new indie soul was ‘Jump Start’ – a set put together by Solar DJ Ginger Tony to reflect the breadth of music that he featured both in his radio spots and at his live gigs. The album was so well received that the label, Soul Unsigned, has invited Tony to have a stab at a second volume … and the result is a big 14 tracker that’s every bit as good as that groundbreaking first collection.

Like volume 1, this second set embraces a variety of soul genres and sources. But whether the music has a flavour of house or jazz about it and even if the artist is Japanese or Bulgarian, the unifying factor is an enthusiastic soulfulness. The album opens with its most overtly soul cut –Seductive Soul’s ‘Is This Love’. Out of the Rob Hardt stable, the tune’s been around for a while and is already popular on the modern soul circuit – and it’s easy to hear why. Mr. Hardt is a past master at understanding what works in the modern rooms – and here he assembles all the classic ingredients. The LP’s closer is very different. Papik’s ‘Staying For Good’ is a strange mix of jazz and house but the Italian sourced mix works well. In between there’s all kinds of everything. Gizelle Smith’s ‘June’ is another fine piece of modern soul – reminiscent of those great Romina Johnson efforts back in the day while Tape Five’s ‘Birds Like It’ is a loose limbed jazzy concoction. Its provenance is German but London based Iain Mackenzie nails the vocal – preventing it from hitting the middle of the road. Those who like their soul with lashings of house feeling will love both ‘Weak’ from Monday Michiru and DJ Kawasaki’s ‘It Makes Me Feel Like Dancing’. Elsewhere The Jazzinvaders’ ‘Make It Work’ is built around a drum n bass chassis while Dielser’s ‘Samba Magic’ speaks for itself. Indeed, something for everybody – best summed up, maybe, by the (mainly) instrumental track ‘Karabine’ from the Renegades of Jazz. There’s an awful lot going on in that one’s 4 minutes 18 seconds… but then there’s an awful lot going on right across the collection.