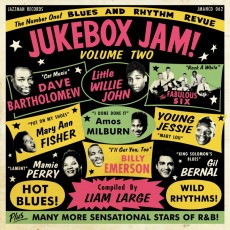 London’s Jazzman Records – a reissue specialist – boasts a small but perfectly formed catalogue. Esoteric, yes but it’s quality all the way with the music having been resurrected and compiled by people who really care about the sounds they’re curating. A couple of years back they issued a great authentic R&B compilation that reflected the atmosphere generated at Liam Large’s London club nights where he spins real R&B – the earthy black music of the 50s and early 60s that’s sadly too rarely heard or even acknowledged these days.

That compilation went onto become a steady seller… logical therefore to issue a second set; and here it is. ‘Juke Box Jam 2’ is an action-packed 23 tracker consisting mainly of lesser known R&B masterpieces from a Golden Age of black music. The earliest recordings date from the 40s and the most recent were released in 1963/64. Biggest names on the set are possibly Little Willie John, Barrett Strong, Amos Millburn and Dave Bartholomew. John offers his King 45 ‘It Only Hurts A Little While’; Strong’s track is 1964’s ‘Misery’ – an attempt to rekindle the magic of ‘Money’; the Amos Milburn cut is a typical raunchy and rolling ‘I Done It’; while Dave Bartholomew’s cut is the jazzy ‘Cat Music’, underlining his importance in R&B hagiography.

The tunes from the lesser known names are no less infectious and inventive. Try the barn-storming and bluesy ‘Noah’ from Grainger Hunt or the wild ‘That Ain’t The Way To Do It’ from Big Sis Andrews – a tunes as far removed from her gospel roots as you could imagine – and you’ll hear what I mean. Other featured artists include Billy Hamlin, Dewey Guy, Betty James, Saunders King and Mary Ann Fisher and if you don’t know too much about them, then the 16 page fully illustrated booklet will fill in all the details. Its crammed with the kind of detail that only an enthusiast would be bothered to unearth. For instance, Bob Marriott’s Continentals (a white group from Kansas) once went on tour with Booker T as his MGs (presumably Messrs Dunn, Jackson and Cropper were back in Memphis recording). It’s that kind of information along with the music that makes this collection so good and – given the sterility of much modern music – so refreshing. Find out more @ www.jazzmanrecords.co.uk