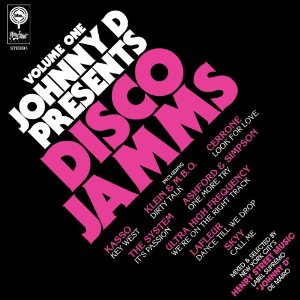 The “Johnny D” of this album’s title is Johnny Demario – founder of the seminal soulful house label, Henry Street Music… the imprint that really did put soul into house. Johnny’s CV though goes way back before that label’s birth in 1993. Growing up in 80’s Brooklyn, young Johnny was always surrounded by music and he began DJ-ing when he was just 12! Aged 14, he was scamming himself into places like Studio 54 but he found more inspiration in less mainstream venues like The Lovelite Club where DJ David Morales held sway. Little wonder, then, when he eventually sourced music for Henry Street that the sounds were always eminently danceable and high on the soul quotient.

Here bbe Records have invited the man to curate their first big compilation for 2012 and he’s gone back to the sounds that inspired him back in the day. Best-known cut on the set is ‘This Time Baby’ from the O’Jays. It’s one of the group’s lesser known items and a little tougher and rougher round the edges than some of their classic hits but Eddie’s in great from throughout. Ultra High Frequency’s ‘We’re On The Right Track’ is another wonderful Philly confection… indeed you could make a strong argument for it defining the sound of that city at that time! Ashford and Simpson keep the soul flowing with the busy ‘One More Try’ while Spencer Jones’ ‘How To Win Your Love’ seems to combine all the loveliness of Alex O’Neal’s biggies with stuff like ‘Love Town’… you know the sound. Stuff like Pamela Joy’s ‘Think Fast’, Infatuation’s ‘Upfront’ and Cerrone’s ‘Look For Love’ veer more towards the techno yet they offer their own period charm and mix well with stuff from people like Skyy and Mahogany.