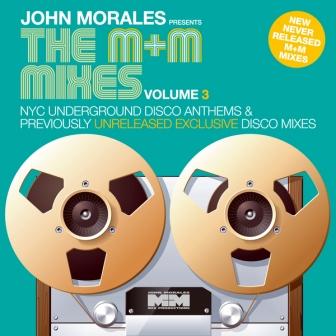 Bronx-based John Morales was one of the first super star DJs. He learned that special dark art in the 70s, when – whilst serving in the US Air Force – he managed to get himself a little job spinning discs for his camp’s internal radio station. After demob he gravitated to the burgeoning Big Apple club scene and his credentials soon got him into the DJ booths of various high profile discos. He quickly saw how the serious dancers craved longer edits than the then available 45s and so with fellow spinner, Sergio Munzibar, he set up his own studios to extend the records. From there he went on to creating medleys and more complex remixes – and soon the work of the M&M Studios (Morales and Munzibar …geddit?) was soon in big demand. In the 90s and for the early years of the new millennium, personal reasons meant he dropped off the DJ/mixer radar and he seemed happy to let younger Turks carry on where he’d left off.

Over the last few years Morales has re-emerged – mixing and playing out with as keen an ear as ever. To reintroduce himself as it were, he’s recently released two compilations of his classic mixes and now here’s the third. Like the other two it’s on bbe Records (an imprint named after Morales’ iconic mix of ‘Barley Breaking Even’ by the Robot Band) but this 3 CD, 24 tracker is just a little different in that most of the tunes have never been heard before – well not in these mixes, that is. This new set is a collection of striking remixes of classic 70s and 80s soul and disco tunes – some from Morales’ archive but most brand new – like the new nine minute plus tweak of Sandy Barber’s ‘I Think I’ll Do Some Stepping On My Own’. Barber was big in the late 70s on the New York underground dance scene and last year bbe released a career retrospective on her that’s worth checking out (see our reviews archive). ‘Stepping’ was always her big tune and here Morales makes it even more irresistible.

Like the other premier mix meister, Tom Moulton, Morales never takes too many liberties with the original material. He retains all the essential ingredients that made the original tracks special … he simply highlights those factors with subtle additions and clever extensions. Take his look at the Dramatics’ ‘Whatcha See Is Watcha Get’. Morales retains that special sharp vocal interplay but accentuates the original cut’s inherent Latin feel. It’s one of the set’s stand outs – rivalled by an epic retouch of Marvin Gaye’s ‘I Want You’. As erotic as the original, Morales substitutes the chiselled, focused backing track with a lazier, languorous, Latin-tinged feel… it works.

Amongst the other tracks that get the Morales treatment are Side Effect’s ‘Always There’, Jean Carn’s ‘Was That All It Was’, Loleatta Holloway’s ‘Hit And Run’ and Curtis Hairston’s ‘I Want Your Lovin’. There’s also two tracks from one of Morales’ favourite artists – Teddy Pendergrass… and ‘If You Know Like I Know’ and ‘Only You’ come out as big as ever. Add to those, music from Barry White, T-Connection, Johnny Hammond, The Jones Girls, The Blackbyrds, John Davis, Instant Funk, Skyy and the Salsoul Orchestra and you have an unmissable soul/dance compilation.