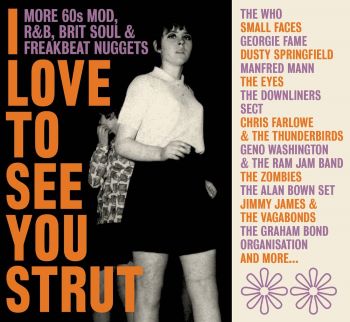 This wonderful ‘I LoveTo See You Strut’ mini box set (3 CDs, 85 tracks!) is the Strawberry label’s follow up to their 2020 collection, ‘Halcyon Days’. Like that one, ‘Strut’ is a comprehensive sweep of 60s UK recorded mod friendly music – the stuff that was played in the trend setting clubs; music revered and collected by the style conscious mod fraternity but neglected in the mainstream… and now, of course, hugely collectable. So step in Strawberry – making this ground breaking music easily accessible.

Like ‘Halcyon Days’, the music on ‘I LoveTo See You Strut’ is presented in a roughly  chronological order. Consequently, you’ll hear the evolution of the “mod sound” from horn-laden Brit covers of US soul tunes, through to freakbeat and psychedelia. That said then, it’s CD 1 that offers soul collectors most interest. There’s music from UK-based soul purveyors like Dusty Springfield (her version of the Leon Huff tune, ‘Live It Up’), Georgie Fame (his take on the Mar Keys’ ‘Last Night’), Geno Washington and the Ram Jam Band, Zoot Money, Herbie Goins and the Nightimers, Jimmy James and the Vagabonds, Chris Farlowe and the Chants. The Chants’ offering is particularly welcome. The harmony group of course hailed from Liverpool (they were famously backed by the  Beatles several times) and member Eddie Amoo went on to help form the Real Thing. The Chants’ offering is the stomping ‘I Don’t Need Your Love’.

On CDs 2 and 3 the music becomes a little poppier, a little rockier, a little more whimsical – but it never lacks interest. Across the 3 CDs there are plenty of big 60s names – The Who, The Small Faces, The Kinks, David Bowie and The Moody Blues amongst them. But their contributions come from the rarer, more esoteric ends of their respective catalogues. For instance, David Bowie’s inclusion is a 1966 B side ‘Good Morning Girl’. Being a 60s compilation there are naturally plenty of Liverpool bands. We’ve mentioned the Chants, but you can also enjoy The (Under) Takers with a fab version of James Brown’s ‘Think’,  the Koobas, the Remo Four and Johnny and John. There’s a track too from the archetypal Brit mod band, The Action (‘Follow Me’) and plenty of previously unreleased material like The Trendbender Band’s version of Ray Charles’ ‘Unchain My Heart’ and the Fingers’ cover of Chris Kenner’s ‘Something You Got’. The album, by the way, is named for Preston band David John and the Mood’s ‘I Love To See You Strut’, presented here for the first time in an “undoctored” mix. The original 1965 recording was artificially speeded up by producer Joe Meek.

The mini box set comes with a comprehensive booklet with track by track annotation. It’s crammed full of rare pictures including gig posters, and band photos. It’s all been put together by Jon Harrington,  a second generation mod. He wasn’t there in the 60s but like all proper music lovers, he knows that the 60s was where “it” all started. The 60s will never go away – and ‘I LoveTo See You Strut’ is absolute proof of that!