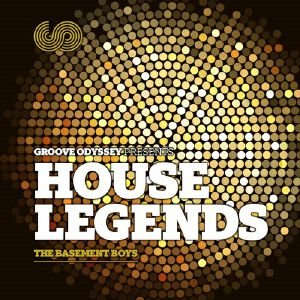 The UK-based Groove Odyssey team were right there at the start of proper soulful house and, logically, in 2005, they started their own label. That label’s most current success is DJ Spen and Hanlei’s ‘No Good For You’ (see our recent news item) but now Groove Odyssey are ready to launch a brand new compilation series… ‘House Legends’. And when it comes to “House Legends” there are fewer bigger and more deserving of the “legendary” tag than the Basement Boys… Teddy Douglas and DJ Spen. For almost 30 years they have together and individually crafted some of Soulful House’s biggest anthems. So what better way to kick of a “legends” series than with a tribute to the best of the Basement Boys?

Here we have 2 CDs stuffed with classics. CD 1 is picked and mixed by Teddy Douglas and features cuts like his own bizarre but mesmeric ‘The Violin’ and the Kenny Bobien-vocalised ‘You Gave Me Love’. Both, of course, very well known, but for the collectors and connoisseurs there’s a previously unreleased version of Teddy’s ‘Bad Luck’ (which features elements of Mass Order’s ‘Life Every Voice’) and another previously hidden gem in the clipped ‘Whatcha Gonna Do’ with quirky vocal from Margaret Grace.

The second CD (Spen’s) features even more classics…. Marc Evans’ ‘The Way You Love Me’, the Jasper Street’s Company’s percussive, hand clapper, ‘He’s Alright’ and Spen’s own ‘It’s So Easy’ featuring the still remarkable voice of Ann Nesby amongst them! Ms Nesby brings her usual gospel passion to her tune and the same gospel fire and commitment is evidenced in much of the music on the album, particularly in the work of the Jasper Street Company.

Great too to see that Spen has included the UK’s own Shaun Escoffery in his selection. You can guess the tune, of course…. yep, ‘Days Like This’, here in its Deepah Dub Re Rub. Shaun is enjoying a renaissance right now (and wasn’t he fabulous singing ‘A House Is Not A Home’ on the recent BBC Burt Bacharach show?) and his ‘Days Like This’ worthily holds its own amongst some very august soulful house company…. “legends” indeed!