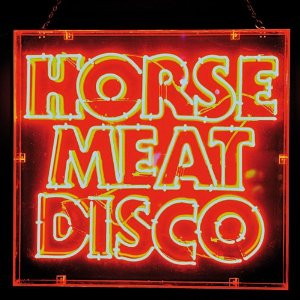 Horse Meat Disco is a long-running club night (seven years and counting…) with a base at The Eagle in London’s Vauxhall and satellites in Lisbon and Berlin. As is the way with nights like this the resident DJs love to issue albums that give a flavour of what they offer and this new collection is the third from the Horse Meat crew – James Hilliard, Jim Stanton, Severino and Filthy Luka. Those who’ve been to the club will know that the foursome aim ( and succeed) at reviving the ethos of the New York club scene in the 70s and 80s and here they do that by offering two distinct flavours across a pair of CDs.

CD 1 is up front, in your face and aimed straight at the dance floor. The flavour’s typified by the Ron Hardy bootleg remix of First Choice’s ‘Let No Man Put Asunder’. Soul folk, though, will be more interested in Leftside Wobble’s ‘Grapevine Boogie’. This is essentially a souped-up mix of Gladys Knight and the Pips’ version of ‘I Heard It Through The Grapevine’. It works well and thankfully the mixers retain the integrity of the original.

CD 2 is much more laid back…. the early morning tunes, if you would. Plenty here to interest soulies – notably Gene Chandler’s ‘I’ll Make The Living If You Make The Loving’ and Two Tons Of Fun’s ‘Just Us’. Baiser’s ‘Summer Breeze’ has merits too and no retro dance mix would be complete without the Salsoul Orchestra. Here we get ‘Seconds’ featuring Loleatta Holloway. Annoyingly (from my perspective, anyway) the music’s ready mixed by the Horse Meat boys but I’m reliably informed that all the unmixed tracks are available as downloads while there’s an unmixed 2 LP set around too.