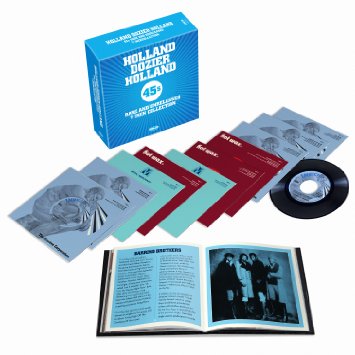 It’s been 45 years since the soul world was taken aback at the news of the departure from Motown of golden boys Holland, Dozier and Holland. Brian, Lamont and Eddie had been with Berry Gordy right through his empire’s breakout years. Indeed some would say that without them there may well never have been a breakout at all. That’s debatable, of course, but what is certain is that by the late 60s the mighty writing and production triumvirate were feeling undervalued, a little unloved and certainly not reaping the monetary rewards they felt were rightly theirs. Cutting to the chase, they decided to split and form their own label. The legal writs flew here, there and everywhere but there was no stopping the momentum and in a comparatively short space of time H-D-H’s Invictus, Hot Wax and Music Merchant labels were scoring the hits.

Over the years those hits (and much more besides) have been re-released in any number of compilations but this new box set of Invictus, Hot Wax and Music Merchant back catalogue is different to any thing that’s ever been out before. For a start, this is a vinyl collection and secondly, (and more importantly, I think) none of the recordings that grace the 10 7″ singles (20 tunes in all) have ever been released in this format and some (the test pressings and acetates) have lain in the vaults till now.

The quality of the material means it’s hard to cherry pick standouts but most serious soul collectors have a soft spot for the Chairmen Of The Board and they offer two great “new” sides. Both ‘What’s The Use’ and ‘Where There Is Faith’ come from previously unreleased acetates. The former shows off General Johnson’s remarkable and unique voice in all its glory while the latter sounds like a long lost Four Tops Motown track. Indeed a lot of the material has that good time Motown feel about it, but I guess that’s not too surprising given the pedigree of the producers! Try, though, the Barrino Brothers’ ‘Trapped In A Love’ to hear what I mean.

Amongst the other featured artists are Eloise Law, The Jones Girls, 100 Proof Aged In Soul, Honey Cone and a little known outfit called Satisfaction Unlimited. Their ‘Why’ is a lovely, light little thing – not the sound you associate with Invictus.

Three of the singles feature Tom Moulton mixes; they are vocal and instrumental versions of the Chairmen’s ‘Give Me Just A Little More Time’ and ‘Dangling On A String’ and Freda Payne’s ‘Unhooked Generation’. They provide the cherries on this wonderful collection and what a great stocking filler for a serious soul collector.