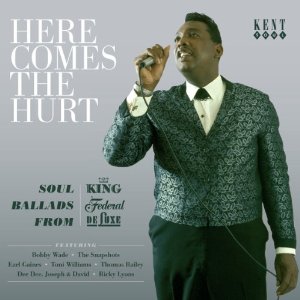 Ace Records set up their Kent imprint some 30 years ago as an outlet for the then growing demand for rare Northern soul. Since then Kent has issued countless Northern compilations and many magnificent single artist sets. As the label’s grown it’s diversified so that it now also specialises in (amongst other soul genres) deep soul, Southern soul, Motown and sweet soul balladry and this new 21 tracker is a fine example of their work in that last category.

All the music here is taken from the back catalogue of King Records – which also encompassed subsidiaries like Federal and De Luxe and the album’s title comes from the opening track – Hank Ballard’s ‘Here Comes The Hurt’. The 1967 recording is a moody ballad that sets the tone perfectly for everything that follows. Charles Spurling’s ‘Don’t Let Him Hurt You Baby’, James Duncan’s ‘Why’ and Earl Gaines’ ‘The Door Is Still Open’ offer more of the same … macho soulsters proffering different degrees of supplication and regret. Fans of femme soul will find lots to please here too. Christine Kittrell’s ‘Ain’t Never Seen So Much Rain Before’ and June Sim’s ‘Tell The Whole World’ are both perfect examples of forlorn balladry – mixing hope and despair in roughly equal amounts.

There’s also plenty for collectors of obscure vocal groups. There’s music from The Snapshots, The Bobettes, The King Pins and the prosaically-named TC Lee and The Bricklayers. While they make take the award for best/worst name – the inclusion from Dee Dee, Joseph and David scoops honours for best song title. The desperation they build into their offering totally matches the songs title – ‘City Called Loneliville’. Bobby Wade’s ‘Blind Over You’ is another harmony soul gem –though credited to Wade on his own. The song was written by two of the O’Jays (Bobby Massey and Walter Williams) and the Kent compilers suggest they may be the producers… and by deduction therefore the suppliers of the harmonies.

On a poignant note, there’s also a cut from the recently deceased Marva Whitney. Probably produced by James Brown, ‘Your Love Was Good For Me’ is a sweet and mellow ballad that shows that there was much more to the lady than in-your-face funk. A lovely surprise… but then you get used to that kind of thing with Kent compilations whatever the genre.