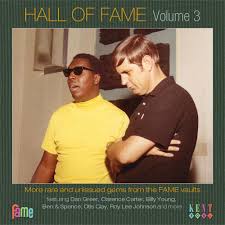 As is patently obvious this is Ace/Kent’s third dip into the archive of Rick Hall’s Muscle Shoals-based Fame vault and despite a previous two volumes worth, there is absolutely no dip in quality or soul quotient. There is a difference between this set and volumes 1 and 2 though. Where those two discs offered a cross section of male/female/group selections, volume 3 focuses on male artists and though there are some big names featured there are also lots of great unknowns like Roy Lee Johnson, Dan Brantley and Billy & Clyde. That duo kick things off with a jaunty ‘A World Of My Own’… an unusually uptown flavoured tune for Muscle Shoals. Nothing is known about Billy and Clyde and in fact the Ace/Kent compliers have made up their names… thinking that one of the voices sounds like Billy Stewart while the name Clyde just “sounded right”. The tape was found in a vault box labelled ‘Otis acts’ so clearly Mr. Redding was involved. Whatever, it’s a great cut. The set features two more totally unknown singers and the Ace people couldn’t even come up with plausible names… so the mournful ‘I’m In Love’ and the frantic ‘Your Sister’s Keeper’ are credited to “Unknown Males”.

Artists like Clarence Carter, George Jackson, Prince Philip and Otis Clay need no introductions or explanations. Their contributions are, as you’d expect, all first class. Clay’s two contributions in particular are outstanding. They are the two sides of the very first single released on the Atlantic subsidiary Cotillion. The A side was/is a swinging version of Sir Douglas Quintet’s ‘She’s About A Mover’. Always a great tune, Clay takes it right down to Soulsville, where its spiritual home always was. The B-side was/is a great take on ‘You Don’t Miss Your Water’ – a two and half minute definition of Muscle Shoals soul.

Those two cuts came out in 1968, but incredibly 20 of these tracks have never been issued in any form before…. amazing. And what’s more amazing, is that we’re told there’s lots more to come. Bring it on!