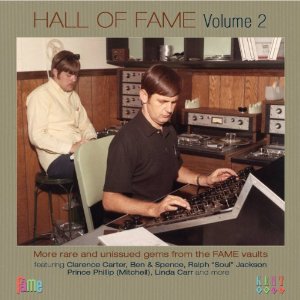 Southern soul collectors will be delighted with this new Kent 24 tracker –the label’s second in-depth offering of rare and previously unissued Fame-recorded material. Like Volume 1, this new collection features some big soul names and lots of lesser luminaries (along with five unknown artists) and what beggars belief is the fact that of the 2 dozen tunes, only three were ever officially released. They are Billy Young’s anguished ‘Have Pity On Me’ (issued on Chess), Ralph “Soul” Jackson’s gritty ‘Don’t Tear Yourself Down’ (released on Amy) and Otis Clay’s Cotillion-issued ‘That Kind Of Loving’.

Amongst the “new” releases are gems from big “names” like Joe Simon (‘Get In A Hurry’), George Jackson (‘I Smell A Rat’), Prince Philip (Mitchell) (‘Fool For A Woman’), Clarence Carter (‘Take It All Off’) and O B McClinton, whose vocal on ‘You Can’t Miss What You Can’t Measure’ is an uncanny Mick Jagger sound-alike… wonder who influenced who?

Standouts from the lesser known artists are George Soule’s catchy, almost uptown ‘Midnight Affair’, Big Ben Atkins’ Marvin-Gaye-flavoured ‘I Can’t stop (No No No)’ and a sweet tune called ‘Unfortunately’ from someone simply called Jackie – even the Ace/Kent soul detectives couldn’t discover more. They also drew total blanks on five songs whose artists sadly remain totally anonymous. Two beauts amongst that quintet are ‘My Dreams Don’t Ever Come True’ from an unknown female – shades of ‘Our Day Will Come’ here and an unknown male’s ‘Got To Get Over’ which seems to draw its inspiration from ‘Soulful Strut’ – albeit a rougher, southern kind of strut.

The usual excellent Kent sleeve notes offer hints about some of the unknowns but naturally give you everything you’ll ever need to know about the rest.