VARIOUS: Groove With A Feeling (BGP) 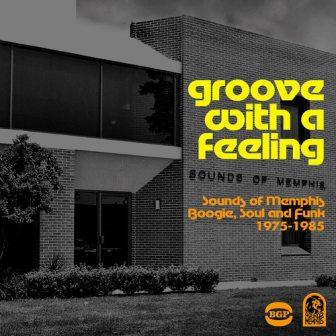 UK reissue specialist Ace Records has, over the years, done sterling work supplying lovers of Southern soul music with plenty of rare, archive material. Their latest compilation in that area is this 19 tracker on their BGP imprint which focuses on the output of Memphis studio, Sounds Of Memphis. The studio was built by entrepreneur Gene Lucchesi with the profits of his novelty hit ‘Woolly Bully’ by Sam The Sham and the Pharaohs. At first Lucchesi leased out most of his productions but in 1970 MGM (who’d issued ‘Woolly Bully’) suggested that there be a Sounds Of Memphis label in its own right. In time the label issued some great soul sides on people like Spencer Wiggins and The Ovations and Ace/Kent/BGP have reissued much of that material.

This new collection brings together 19 Sounds Of Memphis recordings from the 1975-1985 period – an era in which it was becoming more and more difficult for indie labels to survive. Sounds of Memphis kept going by tapping into the pool of talent that Memphis seemed to effortlessly produce and to focus on the kind of music that they knew they could do best. Disco and rock weren’t for them; rather, label bosses kept things simple – soulful and funky and to describe the music here we could add to those adjectives, “basic” and “rustic”. Cleverer writers than this reviewer would probably use “boogie funk” as the catch all for what’s on offer here.

Little known artists like Erma Shaw, Donald O’Connor and Freedom Express work on items that are earthy and down home. Heavy bass lines and punchy brass help deliver the message in the music and it’s clear that Sounds Of Memphis (like many indies) had its own distinct sound. That said there are a number of oddities. First up a great cover of the Spinner’s ‘I’ll Be Around’ which is heavier and “different” to the very special original. Then there’s a version of Isaac Hayes’ ‘Do Your Thing’ from an artist who even the Ace/BGP detectives couldn’t indentify from label archives. Whoever the “unknown artist” is he does a great job. Oddest of the odd though is a bizarre version of ‘Auld Lang Syne’. Here it’s called ‘New Lang Syne’ and it’s as good/bad as that title suggests! What it also does though (like everything here) is to show that there was plenty of musical life in Memphis after the demise of Stax.