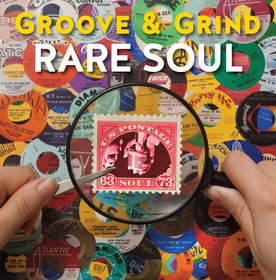 For many years the UK specialist soul labels have led the way in finding rare, collectable soul to feed the passions of European collectors and crate diggers. Now US label Rockbeat enters the fray with a four CD box set that rivals (surpasses even) the best that the UK labels have ever offered. ‘Groove And Grind… Rare Soul’ is a lovingly curated collection that pulls together a mighty 112 tracks from all kinds of sources and almost all of those cuts make their CD debut. There is so much that’s good here that it’s difficult to know where to start with a review. Maybe the best way forward is to look at each of the CDs in the set in turn – a job made easier by the way the compilers have grouped the music by simple category.

The first CD is dedicated to “urban soul” – the music of cities like New York, Chicago, Detroit, Philadelphia and Los Angeles and like the other 3 CDs there are some famous names here along with a whole raft of obscure artists. Among the big hitters are Ike and Tina Turner, Tommy Hunt, King Floyd, Betty Lavette and a certain Kenny Gamble. The Philly maestro is here fronting the Romeos on a 1967 Atco waxing, ‘Hard To Find The Right Girl’. It’s a superb harmony ballad but many of the cuts from the “unknowns” on the CD are equally excellent. Try the lilting ‘I’m Hip To You’ from the Jelly Beans or the Impressions-flavoured ‘Are You Gonna Leave Me’ from Arkansas-born Jessie James. And looking for real obscure? What about ‘Please Consider Me’ from Tyrone The Wonder Boy? It’s a 1966 Four Brothers label rarity and the voice sounds oddly familiar… and so it should. It’s one of our old heroes – Tyrone Davis before he moved on up at Dakar!

CD 2 focuses on “group soul” and I’m guessing that the  names of most of these aspiring bands will only mean something to died-in-the-wool collectors. Amongst the generous 28 cuts you can enjoy an early outing from the Phil Perry-led Montclairs (‘Never Ending Love’) then there’s a dramatic ‘Cry No More from the C.O.D.s , best known, of course, for their hit ‘Michael’. Their ‘Cry No More’ is a superb Chicago group artefact as is ‘Miss Heartbreaker’ from the Ascots. Where would they all have been without dear old Curtis Mayfield? Other outfits featured here include The Sweet Things, The Tempos, The Four Pennies, the Specials and The Dynamics.

‘Groove And Grind’s’ third CD turns the collectors’ spotlight on “southern soul” and here there are maybe more “bigger” names in the mix. Amongst those names are Margie Joseph, Candi Staton, Carla Thomas, Al TNT Bragg, Eddie Floyd, Betty Wright and every soul connoisseurs favourite, Sam Dees. Dees weighs in with 1969’s ‘It’s All Wrong (It’s All Right)’ – a chilling ballad that he recorded for Lo Lo Records. Interestingly the song isn’t a Dees’ original. Writing credits go to Muscle Shoals’ duo, Marlin Greene and Eddie Hinton. Other noteworthy items include Bobby Parker’s ‘Get Right’ – based loosely on ‘Just A Little Bit’ while there’s a great version of Jerry Butler/ The Impressions’ ‘I’m A-Telling You’ from Buddy Grubbs. That man Mayfield again!

Funk’s the fare on offer for the fourth CD in the collection and the soundscape’s as gritty and as tough as you’d expect from recordings culled from unknown artists working for obscure labels. That sound is maybe best typified by  a fab ‘Original Funky Bell Bottoms’ from the wonderfully-named Ironing Board Sam, who, we’re told, used an ironing board on stage to support his keyboard! Listen up too to ‘Free And Easy’ from Jesse Hill – yes, the Ooh Poo Pah Doo’ man. But listen in anywhere and hear tough, uncompromising funk – sparse and soulful.

That tough sparseness is in part attributed to the fact that many of the tracks here (not just on the funk CD) were taken from the original vinyl as, in lots of the cases, the original tapes were long gone. That though only adds to the appeal. Real collectors see nothing wrong with a few friendly crackles. Great music, after all, is meant to be played!

Real collectors too will be delighted by the 127 page hard back book that comes with the set. The notes come via soul specialist Bill Dahl and he’s at his encyclopaedic best. They add real value to a set that retails at just under £50 but compare that to what you might pay for more dubious pleasures and I’m sure you’ll agree that that represents tremendous value. And hey, Christmas is only a mere four months away…. put ‘Groove And Grind… Rare Soul’ on your wish list…. you won’t regret it!