VARIOUS: Good All Over (Westbound) 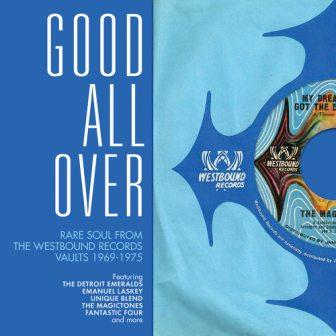 Westbound was a great soul-issuing Detroit label that was founded in 1968 by Armen Boladian. Boladian had been in the music biz since the 50s and was well known throughout the industry and he set up Westbound in defiance of Berry Gordy who’d done his best to swallow up every other Detroit indie. UK reissue specialist, Ace Records have a unique licensing deal with Westbound and over the years have released some wonderful Detroit archive material and this new 23 compilation maintains the quality.

All the music here comes from the first six years of the label’s existence and it’s quality uptown soul all the way as Boladian strove manfully to fill the void left in Detroit as Motown moved out West. The album opens up with a great tune from the underrated Fantastic Four. The ex Ric Tic outfit were picked up by Boladian after they’d been dumped by Motown and ‘I’m Falling In Love’ reaffirms what soul connoisseurs know about the group and the quality of James Epps. We’re treated to two more Fantastic Four cuts here – the searing ‘If You Need Me Call Me’ and the stately ballad ‘I Believe In Miracles’. The label’s other big harmony group, The Detroit Emeralds, have a couple of cuts while their lead A. C Tilmon offers a pair of solo sides. He’s also featured on another album highlight – a dramatic ballad duet with Denise LaSalle, ‘Tender Moments’.

But as is often the way with compilations of this nature, it’s the lesser know names that bring the real delight. Try any of these for some special Detroit soul magic – ‘Mommy And Daddy’ from Unique Blend; ‘What Am I Gonna Do’ from the Houston Outlaws; or Damon Shaw’s ‘Admit Your Love Is Gone’. In honesty, though, dip in anywhere here and you’ll hear top notch, uptown, indie soul and most of the stuff here has never been available on CD before… enjoy!