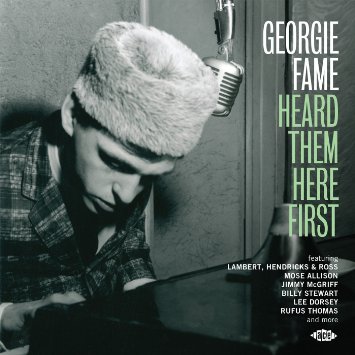 On the UK soul and jazz scene, 2015 has certainly been the year of Georgie Fame. Celebrating almost 60 years in the business, Leigh Lancs’ Clive Powell’s been everywhere…. long, sell out tours, reissues of his past classics, interviews, broadcasts… and a brand new album (see our recent review).

Now Ace Records (who always do these things rather well) have offered Georgie their own accolade in the form of one of those ‘Heard Them Here First’ albums. You know the sort of thing; there are lots about on all kinds of artists…. a collection of tracks and tunes that were the early influences on those particular artists.

Here Ace complier in chief, Tony Rounce, has assembled a generous 25 tunes that were obvious influences on Georgie’s unique style and/or were also covered by him on his early albums.

The collection kicks off with The Spinners’ ‘Sweet Thing’. It’s generally acknowledged that Georgie’s recording of the song is the best UK cover of any Motown tune and Georgie recorded it after working the Motown Revue that toured the UK in 1965. From that period you also get Earl Van Dyke’s ‘Soul Stomp’. A great Hammond-led swinger and George himself always admits that on that 1965 tour he learnt a lot from the Motown band leader.

Other soul cuts on the album include Major Lance’s ‘The Monkey Time’, Rufus Thomas’ ‘The Dog’, the Miracles’ Shop Around’, Sam Cooke’s ‘Its Got the Whole World Shaking’, Joe Hinton’s version of ‘Funny How Time Slips Away’ and Billy Stewart’s ‘Sitting In The Park’. Those last two are particular Fame favourites; he recorded both of ’em twice and still features them in his live shows.

Georgie also always acknowledges his debt to Mose Allison and Oscar Brown and they’re represented here by ‘Work Song’ (Brown) and ‘Love The Life’ (Allison)… you also get some ska/calypso and naturally the original vocal version of ‘Yeh, Yeh’ (from Lambert, Hendricks and Bavan) – the song that gave Georgie his big break through.

One tune is conspicuous by its absence. Georgie loves the Goffin/King number ‘Point Of No Return’ and he always plays it on his live shows. The song was originally recorded by Gene McDaniels, but Georgie bases his version on Louis Jordan’s recording which he cut for Ray Charles’ Tangerine label. I’m guessing that licensing problems are the reason for its absence here. …. not a problem ‘cos its omission’s more than made up for by lashings of great vintage soul, jazz and ska!