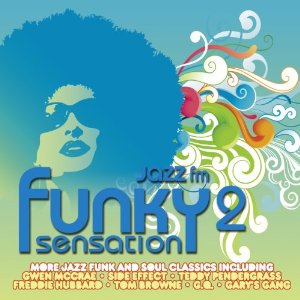 This new 2 CD, 26 tracker is (obviously) the second Jazz FM/Expansion collaboration to tie in with the radio station’s like-named programme and the successful club nights which are now based in a number of venues and, of course, the original Ronnie Scott’s base. Like Volume 1, a superficial glance at the title might cause confusion, ‘cos there’s nothing here that’s truly funky in the proper use of the adjective… rather, the music herein is 70s and 80s soul, disco and jazz funk. ‘Funky Sensation’, you see, is brand and if you know the radio shows or have been to the club nights, you’ll know what to expect – a superior mix of good time music embracing the familiar and the not so familiar.

The familiar includes Side Effect’s ‘Always There’, Gwen McRae’s ‘Keep The Fire Burning’, Evelyn King’s ‘Love Come Down’, Tom Browne’s ‘Funkin’ For Jamaica’, Loose Ends’ Hanging On A String’ and Phyllis Hyman’s ‘You Know How To Love Me’. Yes, they’ve all been done to death – but in the context of the brand they need to be included. As familiar is Chic’s ‘I Want Your Love’ – good to have it; we don’t seem to get too many Chic tunes included on compilations.

Of the less familiar there’s Steve Shelto’s ‘Don’t Give Your Love Away’, Orlando Johnson’s ‘Turn The Music On’, Seawind’s ‘He Loves You’ and Freddie Hubbard’s ‘You’re Gonna Lose Me’. That one, from 1981 and featuring soulful vocals from Jeanie Tracey, is an example of what many “proper” jazzers were doing back then – making a more readily accessible music in an attempt to score a hit; it does, of course, feature a tremendous trumpet solo.

Add to all that tunes from the likes of Paulinho Da Costa, G. Q., Brass Construction, Keni Burke. Teddy P, The Players Association, Slick, George Duke, Rodney Franklin and many more and you have a great compilation…good time music, indeed!