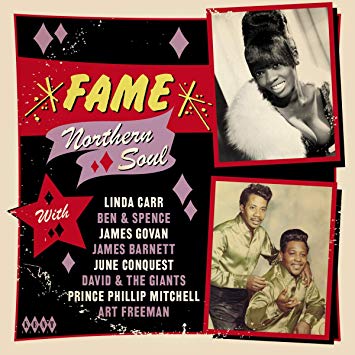 The famous Fame studio and label down in Muscle Shoals helped define the signature sound of Southern soul…. an emotion tugging, heart wrenching sound that told of loving and losing, of cheating and winning, of oppression and hardship. What’s not been so well documented, though, is the fact that Rick Hall’s team down at Fame could also turn their hands to any soul sub genre including the optimistic, up-tempo sounds of Motown and up-town soul. To reinforce that point, Ace/Kent have just released this generous 24 tracker that highlights some of the best of Fame’s up-tempo material – tunes that have found favour on the Northern scene or that are destined to after the jocks get their hands on the compilation.

Perhaps the best known track here is Clarence Carter’s ‘Looking For A Fox’ but the Northern fraternity will probably also be familiar with stuff like Arthur Conley’s ‘I Can’t Stop’, James Barnet’s ‘Keep On Talking’, Linda Carr’s ‘Everytime’, Candi Staton’s ‘One More Hurt’ and Spencer Wiggins’ I’m At The Breaking Point’ . Less familiar are items like Bobby Moore and the Rhythm Aces’ ‘Baby Come Back’, George Jackson’s ‘It’s Not Safe To Mess On Me’ and ‘A World Of My Own’ from a duo dubbed here “Billy and Clyde”. The Ace/Kent compilers found this track on one of their searches of the Fame vault and with no artist name of the tape box they simply credited it to “Billy and Clyde” and though this Billy does sound a little like the great Billy Stewart, we’re assured it’s not him!

Other highlights include George Soule’s gorgeous ‘Midnight Affair’, Prince Philip Mitchell’s ‘Love Is A Wonderful Thing’ and Dan Brantley’s ‘The Door To My Heart’ but in all honesty drop in anywhere here and you’ll hear a pulsing, exciting, optimistic and danceable music that rivals anything that the studios of the big Northern cities turned out and as ever the sleeve notes (courtesy of Ady Croasdell) will tell you everything you need to know.