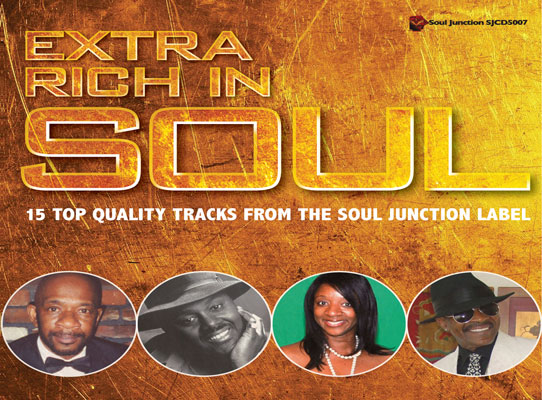 Soul Junction Records is one of the UK’s leading modern soul specialists. Run by knowledgeable enthusiasts, the West Midlands-based outfit scours the States for the best, rare soul grooves – both old and new and the tunes they release regularly become anthems on the UK modern soul scene. To give their label that little extra collectors’ cachet many of Soul Junction releases come as limited edition 7″ vinyl discs and like someone once said, once they’re gone, they’re gone. No wonder then that plenty of Soul Junction’s past product is in-demand with collectors prepared to pay big bucks for the stuff they’ve missed. Well, to help those collectors out and to introduce those not yet in the know about the excellence of the Soul Junction catalogue, the label has just released this – their first CD compilation featuring the best of their output – old and new.

Best known name on the album is the late Oliver Cheatham who offers a great 70s, dancer called ‘Don’t Pop That Question (If You Can’t Take The Answer)’. The song was discovered on an old acetate doing the rounds on e-bay but when Soul Junction got hold of it back in 2010, its good time atmospherics made it one of the label’s fastest sellers. David Washington is another “known name”. The ex-Chapter 8 man’s inclusion is the ultra tight ‘Games’ which has rightly been getting lots of plays on the best of Jazz FM’s soul shows. It’s one of this set’s undoubted highlights but listen up too to stuff like August Heat’s ‘Fly Away’, Audio (AKA Vince Broomfield) with the delightful ‘Won’t Somebody’ or Bill Spoon’s ‘I Can’t Wait Until The Weekend’. Most of those cuts will be familiar to Soul Junction regulars but to tempt them into investigating, the compilers have included several previously unreleased tunes. They include a pair from Clayton Hooker who worked out of Detroit before moving onto Vegas to work with Janet Jackson and a lovely, light ‘Thank You Baby’ from Californian group Natural Impulse.

There are also two brand new recordings on the album – One Nation’s ‘I Like Your Style’ and ‘Pix’y’s version of Rose Royce’s ‘Love Don’t Live Here Anymore’. Both are perfect for the Soul Junction profile – classy, classic modern soul with the emphasis on “soul”. Find out more @ www.souljunctionrecords.co.uk and remember what we said up top “once it’s gone, it’s gone”.