VARIOUS: Everything Is Gonna Be Alright (Westbound/Ace) 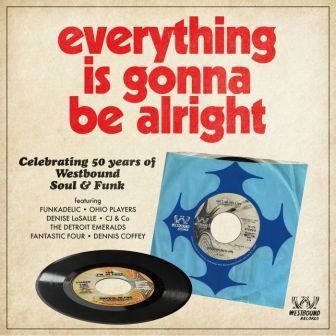 Over the past several years the UK collectors label Ace Records has released plenty of material from one of Detroit’s most important labels … Westbound Records. The label was set up fifty years ago by Armen Boladian and, incredibly, it’s still in business and still helmed by Boladian! To celebrate this remarkable achievement, Ace, via their special Westbound link, has just issued this 24 track retrospective of the very best of Westbound’s soul and jazz output (the label, by the way is multi genre.)

This collection, named for the popular Bill Moss gospel track, opens with Westbound’s first release… ‘A Letter From Vietnam’ by Emanuel Lasky and ends with the Mike Theodore Orchestra’s 1979 disco outing, ‘High On Mad Mountain’. In between there are offerings from well known names like Denise LaSalle, the Ohio Players and the Detroit Emeralds; though perhaps the most important artists on the album are Funkadelic. Those who know their Detroit music history will know that originally Funkadelic were the backing band for George Clinton’s vocal group, The Parliaments. When the two camps combined, the results were remarkable to say the least. The Funkadelic axis has two tracks here, ‘I’ll Bet You’ and ‘Standing On The Verge Of Getting It On’.

Based in Detroit, Westbound would, of course, use plenty of players with Motown links. Amongst those “Motown linked” highlights here is guitar ace Dennis Coffey. A prolific Gordy session player, he enjoyed success in his own right working on CJ and Co’s ‘Devils Gun’. The Fantastic Four were Motown alumni too and here you can enjoy their gangster-themed disco outing ‘Alvin Stone’. The Fantastic Four were one of countless Detroit vocal groups hustling for deals in the city and there are more excellent groups here – amongst them The Magictones and Unique Blend whose subtle and sweet Yes I’m In Love’ is an album highlight while Northern collectors will be delighted to have the Houston Outlaws’ ‘Ain’t No Telling’ included.