VARIOUS: Everybody Makes A Mistake (Kent) 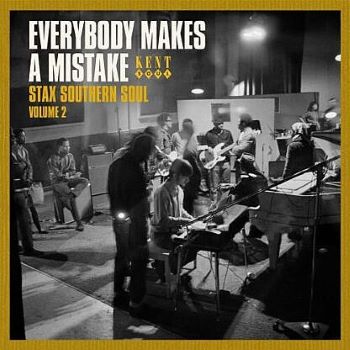 ‘Everybody Makes A Mistake’ is the second  collection from Kent Records which sets out to prove that Stax Records produced plenty of stunning, emotion-churning, “for real”, Southern soul. Of course, real, old school soul collectors know that all too well. But more mainstream fans might think that the big names, the big hits, the big city location and the sometimes more polished production techniques meant that Stax music was somehow inherently less authentically soulful than recordings cut for smaller, less commercially successful  labels like Goldwax, Murco, Jewel or SSS.

Yes, that’s nonsense, but if anyone needs proof – point them to this 20 tracker. The album is named for Eddie Floyd’s ‘Everybody Makes A Mistake’ – a song as searing as anything that emanated from the so called “classic” Southern soul labels. And, of course, Floyd was a “big name”. His ‘Knock On Wood’ was a colossal worldwide hit but that didn’t mean he couldn’t “do soul”’. William Bell is another featured “big name”. He opens the album with a stunning, pleading ‘I’ll Do Anything For Your Love’. Shirley Brown was hugely successful too. Her ‘Woman To Woman’ still stands repeated plays but here her version of Aretha’s ‘Ain’t No Way’ proves she was a major soul contender. In the Stax hagiography, Isaac Hayes  was one of the very biggest names. His “Black Moses” persona, I guess, ran against the accepted image of the home spun, country boy soul singer image but here his take on the Homer Banks/Carl Hampton/Raymond Jackson song ‘I’m Gonna Have To Tell her’ is a Southern soul gem.

Other featured artists include Ollie and the Nightingales, David Porter, Randy Brown, Eddie Giles, Bettye Crutcher and Mavis Staples (that last name almost defines “soul”, doesn’t it?) – so plenty of variety. Collectors will be delighted to have some previously unreleased tracks too. There are two by the aforementioned Eddie Floyd. One is that ‘Everybody Makes A Mistake’, (an old Otis Redding song, by the way), the other is ‘How Can I Win Your Love’, then there’s ‘Standing In The Safety Zone’ by the Soul Children. Any of those, indeed any of the selected 20 cuts, would sit easily on those classic Dave Godin ‘Deep Soul’ albums, that how properly  Southern soulful Stax was.