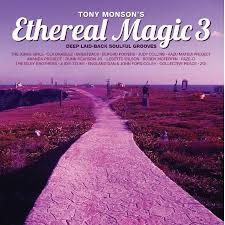 Tony Monson is a respected UK soul writer and broadcaster… indeed he’s’ one of the founding fathers of Solar Radio. Some years back in his late night shows Tony would play some real left field items that were linked by their laid back qualities, their complex arrangements and poignant vocals. The spot during which he played these tunes he dubbed “the Ethereal Magic Sessions” and to his surprise the station received loads and loads of positive feedback most notably from the team that runs the Expansion soul label. They commissioned Mr M to compile an ‘Ethereal Magic’ album and the collection was so successful that volume 2 soon followed, and now – voila… here’s Volume 3.

This new 16 tracker, naturally, follows the same pattern as volumes 1 and 2…that’s to say lashings of what we mentioned above…. laid back qualities, complex arrangements and poignant vocals. And like those first two collections Tony M hasn’t just restricted his choices to the soul genre. Here you can enjoy classy, adult pop like England Dan and John Ford Coley’s ‘Love Is The Answer’ and Judie Tzuke’s ‘Stay With Me Till Dawn’; laid back jazz like Bobby Mc Ferrin’s version of Van Morrison’s ‘Moondance’; Deep House in the form of ‘Into The Sunrise’ from the Ananda Project’; and Judy Collins’ bleak, genre bending reading of Randy Newman’s ‘I Think Its Gonna Rain Today’.

Given Monson’s pedigree you can be sure that there’s plenty of great soul too – and a well-thought out mix of big names and lesser luminaries. I mean the Isley Brothers (‘Groove With You’) sitting cheek by jowl with the almost unknown Buford Powers whose ‘Bluz 4 You’ channels a wonderful Lou Rawls. Add to all this, music from the Jones Girls, Ola Onabule, Sweetback and Lesette Wilson and you have a very different kind of compilation and one that works on many levels.