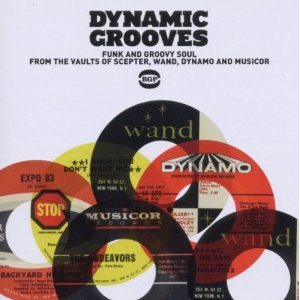 Throughout the sixties the Scepter/Wand and Musicor/Dynamo label groups led the New York independent soul scene. Over the years music from those labels has been lovingly anthologised and reissued and clearly their combined signature sound is the sound of sweet (occasionally symphonic), polished uptown soul. As the 60s wore on however the label bosses began to source more and more music from different parts of the States and so that once easily-defined signature sound started to diversify.

Here the Kent compliers have assembled 21 cuts that show that diversity and the album’s subtitle – ‘Funk And Groovy Soul’ – kind of gives the game away. Here the predominant flavour is funk – in all kinds of varieties. The set opens with the hard, Washington DC funk of Billy Clark and the Maskman’s ‘Soul Party Pt. 1’ (those will long memories will be pleasantly reminded of Rex Garvey’s ‘Sock It To ‘Em JB’ …and the idiosyncratic Harmon Bethea has another cut to enjoy on the set) and ends with the lazy, rolling funk of the Backyard Heavies’ piano-led ‘Expo ’83’. In between there are kinds of everything including rocky funk from Raw Meat (‘Funky Humpback’), laconic New Orleans funk from Allen Toussaint (his version of his own ‘Working In A Coalmine’), a bizarre cover of Marvin Gaye’s ‘Ain’t That Peculiar’ from Philly’s George Tindley, a Temptations’ pastiche (from Boston’s The Endeavours) and lots that veer towards the edge of soul-jazz.

One of the big surprises comes from Wand mainstay Chuck Jackson. The man who epitomises uptown soul sounds remarkably down home and dirty on ‘Candy’. Apparently it was meant to be recorded in Memphis, but when Jackson turned up at the famous American Studios it was shut. The crew had all gone fishing! Jackson returned to New York to record the song but managed to capture some of the feel of the South.

The most typically New York sound her comes from Inez and Charlie Foxx’s ‘Count The Days’ while Betty Moorer’s Esquires-flavoured ‘Speed Up’ is a true uptown delight and really does stand out amongst the funky grunt and grind.