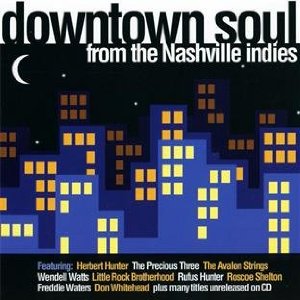 Nashville is rightly known as the home of country music but there’s always been a strong soul presence in the city too. One of the movers and shakers on the Nashville soul scene was Ted Jarrett. From an early age he worked for all kinds of small soul labels and when he took to song writing he scored a massive hit with ‘You Can Make It If You Try’ – recorded by Gene Allison (and hopefully Ted also picked up some royalties when it was covered by the Rolling Stones). In 1968 he set up his own label , Ref-O-Ree Records; then, a couple of years later, he added Tee-Jay to his portfolio and this wonderful 20 tracker offers an overview of what both labels had to offer.

Ted’s profile in Nashville enabled him to sign many of the city’s top soul performers and though people like Peggy Gaines, Wendell Watts, Rufus Hunter and Freddie Waters weren’t nationally known they were big in the south and it was only a combination of bad luck and minimal promotion that prevented any of the recordings becoming major hits (despite selling well in Nashville). Case in point is the jaunty ‘Caught Up’ from Rufus Hunter. For a southern recording it has all the catchy lightness of the best uptown soul, while Wendell Watts’ ‘Will You Be Staying After Sunday’ is a lovely pop-soul confection. If you want something deeper, then The Precious Three’s ‘Wonderful World Of Love’ is a gospel-esque wailer; Freddie Waters’ ‘Reality’ is bluesy while two from Herbert Hunter (‘I’ll Hold You In My Heart’ and ‘Make Me Know’) are fine examples of country soul in the manner of Joe Hinton.

Interestingly, Jarrett also used much of his studio time to record slick instrumentals and over half the tracks here represent that side of his labels’ output. They range from the down n’ dirty take on ‘Ode To Billie Joe’ (Bob Holmes) to Young-Holt inspired items like the Little Rock Brotherhood’s ‘Morning After’. Different again are a pair of cuts from The Avalon Strings. Both ‘Monterey Goodbye’ and ‘Winter I Remember’ are cool and cinematic and though clearly all these instrumental “acts” are the studio band they offer a huge variety.

‘Downtown Soul’ looks a rather unprepossessing album, but if you’re a serious collector of rare 60s soul, you’d do worse than check the album out.