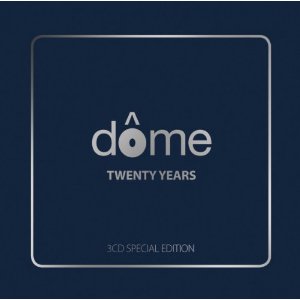 As reported on our news pages Dome Records are enjoying their 20th big year as a leading independent soul label and to celebrate they’ve just released this wonderful little 3 CD box set that offers a generous 50 tracks.

The box’s first 2 CDs chronicle the label’s history through a series of genuine highlights. It all kicks off with that great 1993 duet between Lulu and Bobby Womack- ‘Back For More’ and ends with the equally gorgeous ‘I Fell Apart’ from the Drizabone Soul Family’s 2010 long player. In between there are plenty of heart-warming memory jerkers like Richard Derbyshire’s ‘This I Swear’ and Dennis Taylor’s ‘Smile’ (wonder what ever happened to him?). They both come from Dome’s comparatively early years. From the more recent past there’s stuff like Donnie’s ‘If I Were You’, Eric Roberson’s ‘Dealing’ (which, of course, features Lalah Hathaway) and Avery Sunshine’s ‘All In My Head’. Oh, and just in case you’d forgotten, the collection reminds us that Dome has also licensed material on big names like Brenda Russell and George Duke and provided a home for some of UK’s finest like Beverley Knight and Incognito.

The pack’s third CD is filled with new songs, previously unreleased mixes and concert recordings. They include the gentle Latin swayer that is Khari Cabral Simmons’ ‘Major Bossa’ , Steve Silk Hurley’s mix of Rahsaan Patterson’s ‘6AM’ and the Earth Sold Remix of Down To The Bone’s foot-tapping ‘Watch Me Fly’ featuring the divine Imaani. The quality of this new stuff shows why Dome has stayed successful for 20 years…. the team are always looking for new sounds and innovative material. Resting on those proverbial laurels has never been an option. That also becomes clear if you read through the excellent booklet that completes the set. Put together by label head boy, Peter Robinson, it’s a complete history of Dome and a summation of the label’s philosophy. It comes stuffed with great pix, pointed quotations, interesting anecdotes and it finally reveals where the label name came from. Yep – a great little box and a fitting 20th anniversary tribute.