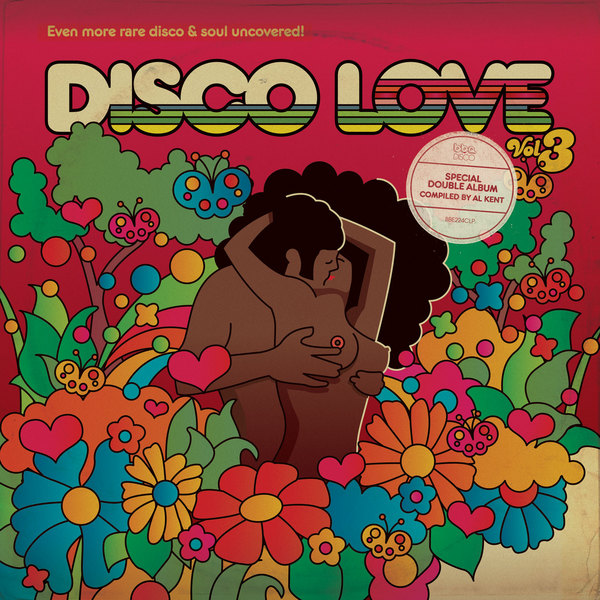 The two Al Kent-complied ‘Disco Love’ albums have been success stories for the small but perfectly formed Hastings-based bbe (Barely Breaking Even) Records. Logical, therefore, for label bosses to get the Glasgow DJ to assemble a third dance collection … et voila – here it is; and every bit as good and varied as the first two volumes and certain to join them in the bbe best seller charts. Why? Well first and foremost, Mr. Kent has an ear for a good dance tune and he, unlike some DJs, doesn’t hold to the theory that if a record’s rare and expensive, it just has to be good. His main criterion is simple. As a club-goer himself he just wants quality music – music with those often indefinable elements that makes it irresistible; here he’s put together a collection that is just that and what’s more, within a fairly restrictive genre he’s managed to pack in lots of variety.

Sure, there are loads here that we could call “traditional disco”. Try ‘Hungry’ from Sandy’s Gang, Magnetic Force’s ‘Is It Wrong’, ‘Waiting In The Wings’ from Marion Jarvis or Moses’ ‘Something About You’ for starters. They’re almost all throwaway items; light and catchy with zipping high hats, swirling strings, racing beats and frothy vocals. They all have a little something though that turns each one into a little earworm that refuses to go away.

Want something a little different? Well there’s the opening ‘Mighty Gents’ from the imaginatively named Mighty Gents. It’s a mesmeric, cinematic instrumental that, for those old enough to know, will recall the best of Chicago’s Soulful Strings. ‘For You’ from Cherish boasts some delightful harmony jazz vocals while the medley that is ‘Oh Baby/Get On Down’ by Bo Galligher TSB Inc features a gritty vocalist (Mr Galligher?) who’s clearly been raised on the best of Teddy P. Ronnie April’s ‘Dancer’s Theme’ is a bass heavy loper while North By Northeast’s ‘Disco Unusual’ and Michael Legair And The Band That Played All Night’s ‘Hustle On Down’ fly the flag for funky disco. Then, rounding things off soulfully is the lovely ‘Human’ from Neo Experience.

Yes, there’s lots going on here on ‘Disco Love 3’ and if you want more, then the second CD in the set offers an Al Kent mix of proceedings while for those who are either very old fashioned or vey modern the music also comes in vinyl… 2 proper LPs of great disco tunes.