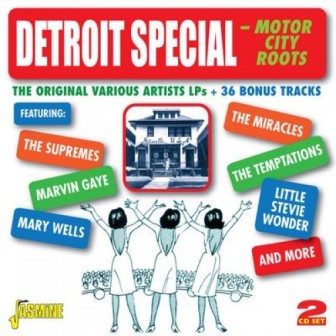 The concept of the compilation album is as old as modern popular music. Record labels big and small have always used the compilation as a kind of shop window for what they have to offer… little wonder that compilations were often referred to as “samplers”. Motown magnate Berry Gordy was quick to see the value of the compilation album and though we have no statistics to hand I’m guessing that no label issued more compilations than Motown… readers of a certain vintage will have fond memories of the UK Motown Chartbusters compilations of course. I wonder how many serious soul fans/collectors were sucked into the crazy world of soul via those wonderful collections.

Whatever, Berry Gordy released the first US Motown compilation in late 1961. It pulled together 10 tracks from his Tamla imprint – hence its name ‘Tamla Special’. It was the company’s fourth ever LP and was followed in May 1962 by ‘Motown Special’ – ten cuts from the specific Motown brand.

Both those groundbreaking LPs have been reissued by oldies specialist label Jasmine Records as a “twofer” but as a real bonus, the original 20 tracks (10 from each LP) have been augmented by a mass of contemporaneous Motown material so that the 2 Cds contain a generous 56 tracks covering the infancy of what was to become a major musical empire.

It’s a breathtaking sweep. You can hear both the label and individual artists searching for a signature sound and amongst those artists are the Supremes (dubbed back then the “no hit Supremes”), Little Stevie Wonder (and we do mean “little), Marvin Gaye, The Temptations (and their alter ego “The Pirates”) and Smokey and the Miracles.  There are plenty of lesser known names too… people like Sherri Taylor and the Valadiers who sadly fell by soul’s wayside.

There are plenty of hits on offer… ‘Money’, ‘Shop Around’ and ‘Do You Love Me’ amongst them but the real attractions are the cuts that didn’t make the cut… charming, embryonic Motown – most known only to die hard collectors, who might have all these tunes somewhere already but presented like this they really do have an impact… and take a look at that cover – a nice homage to the aforementioned Motown Chartbusters (volume 1, I think).