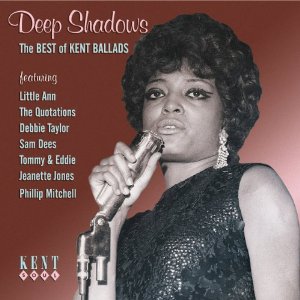 Ace’s Kent imprint is possibly best known for its storming Northern soul compilations; from time to time though they’ve also reissued some sensational slowies. Indeed the label’s third ever release was the groundbreaking ‘Slow And Moody, Black And Bluesy’ while the Kent series of Dave Godin’s ‘Deep Soul Treasures’ has rightly been acknowledged as a classic of its kind. With this new 24 tracker the Kent crew have returned to the concept of that ‘Slow And Moody’ set with a whole CD’s worth of ballads culled from all kinds of different sources.

Primarily the material comes from those US labels that Ace/Kent have productive licensing deals with – so we get a generous selection from GWP, Spring, Money, Shrine, Mirwood and Volt along with oddities that had appeared on long deleted Kent compilations. But no proper Kent set would be complete without a smattering of previously unreleased tracks. Here we get two corkers. First up there’s Jeanette Jones’ ‘What Have You Got To Gain By Losing Me’. Recorded in the late sixties for Golden State Records, it’s a smouldering southern flavoured cut that wouldn’t have been out of place on those aforementioned Dave Godin albums. The other “brand new” oldie is ‘You Must Leave Her Because You Love Her’ from the Paramount Four. The group hailed from Tennessee and the multi-voiced harmony tune was cut for Southern City Records. Shamefully, it’s never seen the light of day till now! Other goodies on the set include a brace of Sam Dees songs. The first is Loleatta Holloway’s version of his ‘Cry To Me’ and the second is the man’s own demo version of ‘Tag Tag’ – a song more usually associated with Bill Brandon.

You also get stuff like Phillip Mitchell’s magnificent ‘There’s Another In My Life’, LV Johnson’s ‘Seeing Is Believing’ , Ray Pollard’s ‘No More Like Me’, Garland Green’s ‘Sweet Loving Woman’ and Little Ann (Bridgeforth)’s ‘Deep Shadows’ which gives its name to the collection. Interestingly there’s also another mix of Jaibi’s ‘You Got Me’… a song that featured on the first volume of ‘Deep Soul Treasures’, which kind of brings us back to where we came in. Dave, I’m confident, could have selected any of the other recordings here for his series. And, yes, I know, that he never claimed that “deep soul” music had to be “slow” – his yardstick was emotional intensity… but every track here has just that.