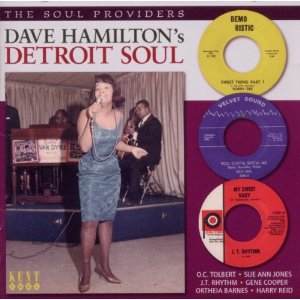 This is the 7th Ace/Kent/BGP dip into the archive of Detroit soul musician, entrepreneur and, seemingly, all-round good guy, Dave Hamilton. Hamilton, of course, was one of the Motor City’s leading guitarists and was naturally there at the beginning of Motown, playing on many of the early classics – notably those of Marvin Gaye. For reasons unexplained he left the Motown fold in the mid sixties to do all kinds of other things including gigging in Detroit’s numerous jazz and soul clubs, session work on the burgeoning recording scene and, more importantly, running his own labels and studio. This new Kent 25 tracker offers a snapshot of Hamilton’s achievements as a label/studio boss by anthologising some of his best work from the 60s, 70s and 80s and it really is a focused reflection of the changing face of Detroit soul through those decades.

The earliest tracks come from ’64 when Hamilton led a label called Temple. They include a rough, infectious instrumental from Frenchy and the Chessmen called ‘Beetle Bebop’ and ‘Don’t You Listen’ – a classic “girl group” sound from Dave’s daughter, Charmaine. Best of the early stuff though is Ortheia Barnes’ ‘Never Leave Me’. Ortheia was JJ Barnes’ sister and she was pacted to Motown for a while, so no surprise that her track oozes all he naive charm of same era recordings from the likes of Kim Weston and Mary Wells. By the way, it’s one of 11 previously unissued cuts.

By the 70s Hamilton was working on harder-edged, funkier material like ‘A Thing Called The Jones’ from Chico & Buddy, and Billy Garner’s ‘You’re Wasting My Time’; then as that decade ended he seemed to find melody and harmony again – typified here by great smooth cuts by Romeo and Juliet (‘You Got What It Takes’) and Nightchill (‘I Don’t Play Games’)… another pair of unreleased items.

The typically thorough Kent sleeve notes from Ady Croasdell will tell you all you need to know about Romeo and Juliet, Nightchill, Billy Garner, Ortheia Barnes et al but they don’ t fully explain why so much excellence stayed in the vault nor why what was released wasn’t more successful…. nobody, I guess, could fully analyse those two variables. At least, though, we now have all the excellence to enjoy.