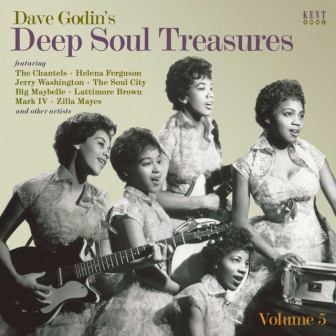 UK soul pioneer/entrepreneur/advocate and journalist (a colleague of mine many years back on Blues and Soul by the way) needs no introduction here. Amongst his many achievements was making “Tamla Motown” a name in the UK, coining the phrase “Northern soul” and defining another black music sub genre “Deep soul”. Dave explained that “Deep soul” was hard to define but it was essentially an adult, tortured music that speaks of pain, heartache, misplaced passion and unrequited love. It’s not always an easy listen and the irony is that this often depressing music possesses a stark beauty all of its own. And Dave was always intrigued by the conundrum as to why a music that was so overtly painful could be so inherently and sweetly addictive. As eloquent as he was though, Dave was ever keen to allow the music do the talking and Ace/Kent were happy to allow him to compile four albums worth of “Deep soul treasures”.

Now some 15 years later the Kent crew offer us a fifth volume. This one’s been put together by Ady Croasdell and to keep the Godin connection strong the accompanying booklet includes an interview with Dave conducted by writer/sociologist Jon Savage in 1997 while there are also briefer contributions from noted soul commentators/DJs like Tony Rounce, Richard Searling and Stuart Cosgrove who add their Godin-influenced ideas on specific tracks and the whole deep soul genre.

But Dave Godin would always say it’s what’s in the grooves (or whatever there is on a CD) that counts and what we get here are 25 magnificent soul cuts … no matter how you want to tag them! As with most Ace/Kent compilations the compilers mix well-known names with the not so well-known… so Gladys Knight and Dee Dee Warwick sit cheek by jowl with unknowns like Rene Bailey and Helena Ferguson whose ‘Where Is The Party’ is an album highlight, described in the notes as “a tremendous slab of pleading female soul”… bob on!

Amongst other personal favourites are The Emotions’ 1968 Stax outing ‘Someone New’, Kenny Carter’s stark ‘I’m Not The One’ and the Chantels’ 1958 doo-wop flavoured ‘Every Night I Pray’. In truth, though, each of the 25 tracks is a real soul highlight and though the selections here aren’t Dave Godin’s, he’d be proud of what’s been created… an album fit to stand alongside the first four volumes of ‘Deep Soul Treasures’.