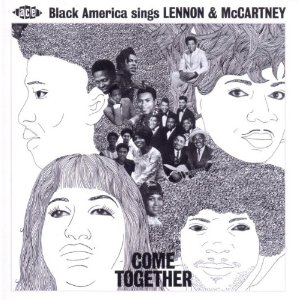 When the Beatles began, their repertoire (live and on record) was stuffed with covers of (then) obscure American hits – many of them soul items. Their first two LPs had no less than eleven covers, and – just as importantly – the band were always quick to sing the virtues of the US stars who were part of their inspiration. People with long memories will acknowledge that in early interviews the Beatles were fulsome in their praise of people like Kim Weston, Mary Wells, Little Willie John and Arthur Alexander. As the Fabs became fabber, of course, they wrote more and more of their own material and, world-wide, artists and producers scoured their albums for songs to cover. Interestingly the first ever cover of a Beatles’ track was dear old Kenny Lynch’s take on ‘Misery’ (if you’re interested the original is the second song in on the Beatles’ first LP, ‘Please, Please Me’) but by the mid sixties Beatles covers were coming thick and fast … and it’s no secret that their ‘Yesterday’ is the most “covered” song of all time.

Here Ace have assembled two dozen soul covers of Lennon/McCartney tunes and as you’d expect with the people at Ace they’ve not gone for the obvious. So, for instance, instead of going for –say – Ray Charles’ classic version of the aforementioned ‘Yesterday’, they’ve opted for a typically harrowing 1968 take by Linda Jones. So it goes on – a fascinating cross match of songs and singers. Sweetest is possibly the Vibrations’ harmony treatment of ‘And I Love Her’ while the most rocking is Little Richard ripping it up on ‘I Saw Her Standing There’. (Paul McCartney, by the way, was always quick to admit the debt he owed to Mr. Penniman for those trademark swoops and soars). Most obvious inclusions are Aretha’s well-known, churchified cover of ‘Let It Be’ and Otis Redding’s super-charged assault on ‘Day Tripper’.

As ever the Tony Rounce sleeve notes are exemplary while the cover is a beautiful pastiche of Klaus Voorman’s ‘Revolver’ art work. A great compilation, this, and a fab tribute to the Beatles and their compliment-returning soul sources.