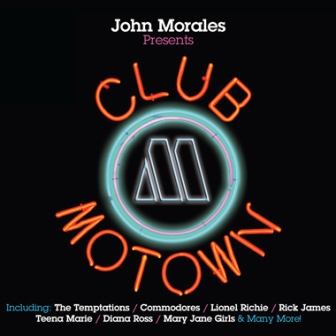 No single record label has a more garlanded history than Berry Gordy’s Motown Empire. Its legacy is phenomenal and its reputation is second to none. Interestingly, though, to casual music fans that legacy and reputation is based chiefly on the pioneering work that Gordy and his artists, producers and musicians crafted in the 60s and songs like ‘My Guy’, ‘My Girl’, ‘I Heard It Through The Grapevine’, ‘Dancing In The Street’ and countless others will forever remain absolute classics.

Motown’s history, however, doesn’t end in 1970. Indeed during the 70s the label released some of the most enduring soul ever committed to tape (Marvin Gaye and Stevie Wonder anybody?). Then as the 70s morphed into the 80s, Motown released dozens more classics that tapped into the spirit of that musical age… the spirit of the disco dance floor.

And now to underline that very point, the label has just released a remarkable new compilation on which Premier League DJ and mixer, John Morales works his considerable magic on a clutch of those Motown dance era gems. Many of the re-toolings, of course, date back to the 80s and have been resurrected from the vaults, but the album offers a selection of brand new mixes too.

New or old, though, the Morales magic works perfectly. Why? Well, simple really. The DJ super star hasn’t risen to the top on gimmickry and remixing pyrotechnics. Like the first great re-mixer, Tom Moulton, Morales only works with material for which he has huge respect and if you love and respect a tune, why try to significantly alter it? So he simply (yes, I know it’s not really that “easy”) extends and enhances the magic that was always there in the first place. He might stress a series of beats; he might enhance a harmonic passage; he might lengthen an important instrumental break … whatever, he just magnifies the beauty that was already there.

Amongst the tunes given the Morales treatment are Dennis Edwards’ ‘Don’t Look Any Further’, The Mary Jane Girls’ ‘In My House’, Rockwell’s ‘Somebody’s Been Watching You’, Diana Ross’ ‘The Boss’ and Lionel Richie’s ‘All Night Long’. My particular favourites feature The Temptations. First up there’s the epic ‘Standing On Top’. This one originally appeared on the group’s fabulous ‘Reunion’ LP (how about a CD reissue someone?) and features Eddie Kendricks, David Ruffin, Dennis Edwards, Richard Street, Glen Leonard and mainstays Otis Williams and Melvin Franklin. Some line-up! And if that’s not enough Rick James lends a hand too! Then there’s the smoother ‘Treat Her Like A Lady’, on which Ali Ollie Woodson proves he was every bit as good a lead voice as those aforementioned legends and Morales just allows his wonderful vocal to shine even more strongly .

That pair of Tempts’ classics are just two of many standouts on the double CD, and if you’re a vinyl head, you’ll probably like to know that there’s a double 12″ pack featuring six of the cuts –the ones by the ladies – Teena Marie (2 tracks), Val Young, Diana Ross, and Tata Vega (2 tracks) .

Vinyl, CD or even digital… take your pick: Everyone’s a winner!