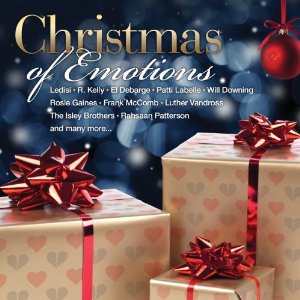 At the time of writing, croaky-voiced veteran Rod Stewart is flying high in the UK charts with a Christmas album that offers more cheese than chestnuts, despite a couple of soulful and noteworthy cameos from Mary J Blige and Cee Lo Green. Of course, even the best of Yuletide confections will have a little bit of schmaltz in its musical DNA – even this one, which is by far the best festive album of the season and features a host of top names from the soul sphere. With its eighteen tracks compiled by Expansion’s Ralph Tee, ‘Christmas Of Emotions‘ is a cornucopia of stylish smooth festive sounds and kicks off with a real gem in the shape of the title track, performed by Eddie Sea and featuring female vocalist Shauntia Toussaint. Stylistically, there are shades of the Hutchinson sisters (aka The Emotions) in the slick gospel-inflected harmonised vocals. While Eddie Sea might be a name unfamiliar to all but the soul anoraks and cognoscenti, there are some big names to entice the causal browser – such as Luther Vandross (his ‘A Kiss For Christmas’ is a mellow mid-tempo smoocher), Patti Labelle (the sprightly Jam & Lewis-helmed ‘Christmas Jam’), R. Kelly (his loping steppers’ groove called ‘A Love Letter At Christmas’) and Stephanie Mills (‘Love Is To Listen’). There are great cuts too from the underrated Rosie Gaines – the superb ‘December 25th’ taken from her early ’90s Motown album – Frank McComb (his Donny Hathaway-influenced ‘Christmas Day’), Ledisi (whose athletic vocals are highlighted wonderfully on the buoyant ‘Thank You’), Be Be & Ce Ce Winans (‘Give Me A Star’) and Lonnie Hill, whose infectious ‘Cold Winter In The Ghetto’ is the set’s oldest cut, dating from ’86. Further quality tracks from El Debarge, Will Downing, The Isley Brothers, Trina Broussard, Jeffrey Osborne, Vanessa Bell Armstrong and Rahsaan Patterson all attest to the fact that there are no turkeys here – the album’s strength is the consistency and appeal of the material and, of course, the soul-infused quality of the vocals, which are top-drawer throughout. A real Christmas cracker this – and a great stocking-filler for those with a penchant for seasonal soul music.