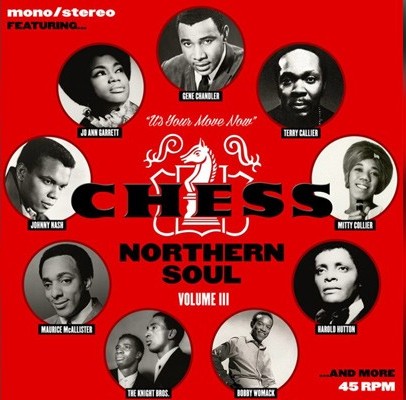 In this digital world soul collectors have been spoiled by the reissue specialists as rarity after rarity and collectable after collectable has been pulled from the vaults and made easily available. More recently as vinyl has enjoyed a renaissance and new fangled things called records players have become cheaper, clever label execs have started to exploit their in-demand back catalogues and reissue material in various vinyl formats. UMC have been one of the brand leaders in this trend, issuing lashings of rare Motown on vinyl. They’re also stewards of the Chess archive and over the last year or so they’ve released some wonderful vinyl box sets featuring music from the venerable Chicago label.

This week UMC are releasing another fab, vinyl box set paying homage to Chess. The box offers seven 7″ vinyl singles featuring 14 in-demand, Northern-soul flavoured tunes from both well-known Chess names and plenty who are maybe best described as label second stringers. That though doesn’t make their work any less worthy. Case in point is the soulful swayer ‘Foolish Me’ from Jo Ann Garrett. Written by Billy Butler and Andre Williams, the cut offers everything that is good about vintage Chicago soul. Equally anonymous are the Starlets but their Billy Davis-penned ‘Loving You Is Something New’ is just as classic a “Chicago sound”. A little less “Chicago” are Jeanette Nellis’ ‘Wait’ and Amanda Love’s politically incorrect ‘You Keep Calling Me By Her Name’. Both were licensed in by the Chess brothers; the former from New York and the latter, recorded elsewhere in Chicago, is decidedly more blues orientated.

Amongst the bigger names in the collection are Bobby Womack, Terry Callier and Gene Chandler. Womack’s cut is a self-penned ‘See Me Through’ which he recorded just as the Valentinos folded; Callier’s offering is the evergreen ‘Ordinary Joe’; while the Duke of Earl delights with his wonderful ‘Such A Pretty Thing’ – the epitome of the Chicago 60s soul sound.

Other featured artists include Harold Hutton, Johnny Nash, Mitty Collier, Maurice McAllister and the sadly underrated Knight Brothers. The sleeve notes will tell you all you need to know about ’em while the actual vinyl discs come in the UK Chess livery – some with silver lettering, others with the rarer gold. And by the way, for those who still “do digital”, the box comes with a download card allowing you access to MP3 versions of all the tracks.