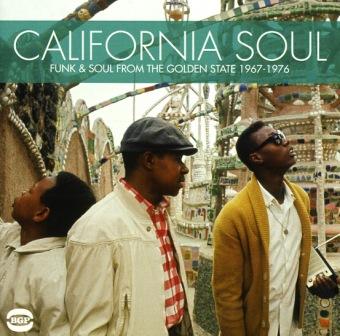 Ace/BGP’s latest compilation is a 22 track look at the soul and funk that came out of California between 1967 and 1976. The Kent compilers have dug into the back catalogues of labels like Money, Dore, Mesa, Hill, Watts Way, Pzazz, Jasman and Music City for the collection and it’s Music City that offers up the album’s best soul cut – ‘When I Had You Baby’ from the Soul Sensations. The song is a sweet harmony ballad that was originally the B–side to the group’s only single.

It’s the album’s only proper ballad. The rest of the fare is largely rough and tough and veering towards the funky end of our musical spectrum…. hence the set’s released on Kent’s BGP imprint. Titles of tunes like ‘The Git Down parts 1 and 2’ by Little Johnny Hamilton and the Soul Pack and ‘Funky With My Stuff’ by The Natural Resources Unpolluted speak for themselves while the artist names indicate that most of the performers here are largely great unknown.

The biggest names on the set are probably ZZ Hill and Alvin Robinson though there’s also a wonderfully named “Eleanor Rigby” (real name?) whose cut, ‘Is It Worth It’, is right on the cusp of soul and funk. The track, by the way, has never been released before … one of four previously unissued collectors’ items amongst the collection.