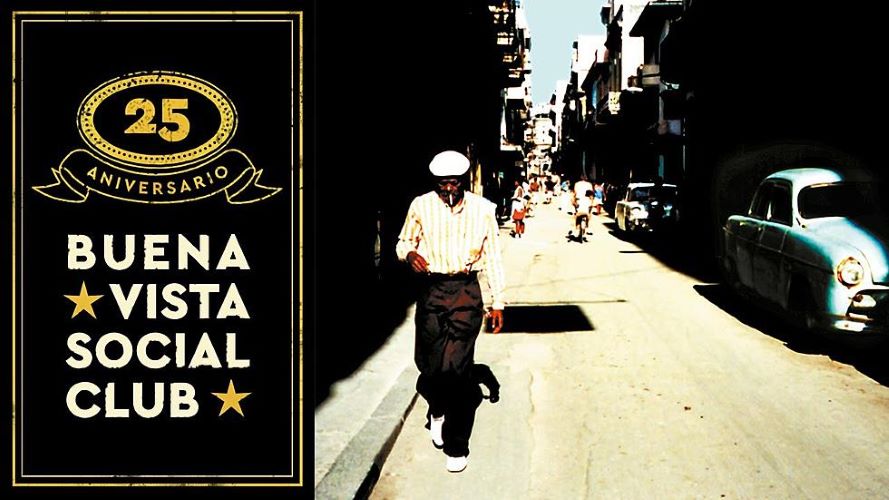 Back in 1996 when record company exec Nick Gold and celebrated roots guitarist Ry Cooder visited the Buena Vista barrio of Havana to record some local musicians at their neighbourhood social club, little did they know the impact their trip would have. The Buena Vista Social Club album and subsequent Wim Wenders film (released in 1999) became global, cultural sensations catapulting the little known Havana singers and players to an unusual kind of acclaim and stardom. Indeed, some like Ibrahim Ferrer, Eliades Ochoa, Compay Segundo, Rubén González and  Omara Portuondo achieved an almost superstar status especially amongst the arty, chattering classes. No Islington home was complete without a copy of the LP! Not just in trendy North London though . The album sold over a million copies, was awarded a Grammy in 1998 and won a place in Rolling Stones list of the top 500 music albums of all time!

Now, 25 years on, custom has not staled the original nor has time diminished its infinite variety. Put simply, the music recorded in Havana back in March 1996 has a magical, timeless, universal quality and to celebrate all the magic and all the quality, World Circuit Records are reissuing the album in a series of  25th Anniversary Editions. First up there’s a 2LP and 2CD De luxe book pack; then a 2 CD set, a 2 LP gatefold edition and also that new fangled digital thing. The whole caboodle  has been remastered by Grammy winning engineer Bernie Grundman and as you’d expect there are new liner notes , previously unseen photos, lyrics, biographies, art prints and a history of the actual club.

But, ultimately, it’s the music that counts and tunes like ‘Pueblo Nueva’, ‘Chan Chan’ and ‘Dos Gardenias’ still have the power to charm and even overwhelm. Collectors though will be drawn to the many new mixes and previously unissued material like ‘Vicenta’ – a feisty duet between Eliades Ochoa and Compay Segundo which actually recounts the tale of a fire which, on April 1, 1909, destroyed almost all of the village of La Maya, close to Santiago de Cuba, where Eliades Ochoa was born and lived as a child amongst plantations of banana, coffee and cacao. Even if you don’t understand the story, I guarantee you’ll be mesmerised by the musical atmosphere – as indeed you will throughout the reissue. In his notes, Ry Cooder sums up the message in the Social Club’s music: “The Buena Vista boys fly high and never lose a feather. If you miss the boat this time, you’ll have the blues forever.” Amen to that!