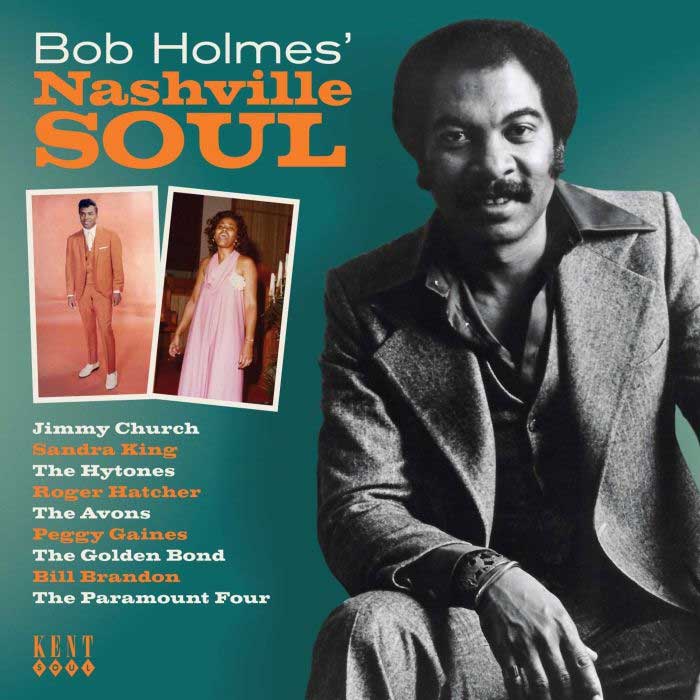 Nashville is the capital of country music but the city also supports (and always has) a thriving soul scene. Nashville’s soul legacy has been explored several times by Ace/Kent and they continue here with a 24 tracker that focuses on one particular aspect of the Nashville soul story… the work of Bob Holmes.

Holmes grew up in Memphis – the son of righteous parents who brought young Robert up in the gospel tradition; their son soon becoming musical director at their local church. Bob eventually attended Tennessee State University in Nashville and though he continued to play in church he began to branch out into secular music too. Landing a job as a music teacher, Bob went on to found the Cremona Strings and he soon became a “name” on the Nashville circuit…. in demand as a session player and arranger. By the mid 60s he was writing and producing too and this compilation offers a cross section of his work as either writer, producer or arranger (sometimes all three) for labels like A-Bet, Ref-o-Ree, Bell, De-Luxe, Excello… even Stax/Volt. The Volt track, by the way, is Roger Hatcher’s ‘I Dedicate My Life To You’ – a typically Southern sounding outing that Holmes co-wrote and arranged. It was produced by Don Davis’ Groovesville outfit and some might remember the Dramatics’ version of the song.

Other Southern fried flavours come courtesy of cuts like ‘You Must Leave Her Because You Love Her’ from the Paramount Four, Eddie Frierson’s ‘Don’t Make Me Look So Bad’ and ‘Right In The Palm Of Your Hand’ from the wonderfully-named Jimmy Church. Surprisingly, maybe, many of the cuts have a real uptown flavour… try The Hytones’ previously unissued ‘Runaway Girl’ or Sandra King’s ‘Leave It Up To The Boys’ which has a real Brill Building feel to it.

Amongst the other highlights include Joe Tex’s wonderful ‘Under Your Powerful Love’. Complete with a typically Tex monologue, you’ll hear Holmes’ skill as a string arranger. Then there’s the smooth supper club soul of ‘Let’s Try Love Again’ from Ruthie. Recorded as late as 1980, it shows Holmes could move with the times. From 1969, The Golden Bond’s ‘I Know (It’s All Over) is a wonderful harmony ballad in the Philly style while the catchy instrumental ‘Girl Watching On Broadway’ from session band, the Little Rock Brotherhood saw action on the Northern soul scene.

Bob Holmes died of heart problems in 2000; but he left a wonderful, proper soul legacy. Enjoy the best of it here.