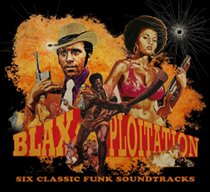 “Blaxploitation” is defined in the dictionary as “a film genre that emerged in the United States in the 1970s and is considered an ethnic sub-genre of the general category of exploitation films”. Dig a little deeper and most sources will tell you that the first blaxploitation movie was 1971’s ‘Sweet Sweetback’s Baadasssss Song’ though many others argue that it was the same year’s ‘Shaft’ that kick-started the genre.

Whatever, soul fans know (and love) it for the memorable and very particular music which the movies spawned and to celebrate that music, Universal’s UMC arm has just released a boxed set containing six classic blaxploitation albums.

First up is ‘Shaft’ –the Oscar-winning Isaac Hayes soundtrack to the Richard Roundtree movie that set the genre template – cinematically and musically. There’s little left to say about the music save that custom has never staled that title tune while the slower love themes retain their magic and don’t forget the confident strut of ‘Cafe Regio’s – one of the most popular talk-over beds for radio DJs. The sound track to the third ‘Shaft’ movie is also in the collection and, of course ‘Shaft In Africa’ is a very different affair to the original. Created by Johnny Pate, the music is both different to Hayes’ and totally different to anything he crafted with the Impressions but it did allow him to show off his jazz credentials. Vocals, of course, come courtesy of the Four Tops.

Roy Ayers’ ‘Coffy’ is the third album in the box and on it the vibraphonist created a broody atmosphere against which Pam Grier’s’ nurse turned vigilante waged a war against the neighbourhood drug dealers. James Brown’s 1973 ‘Black Caesar’ is the fourth set here and it’s a typically Godfather funky thing and though not considered one of his best, it does feature the wonderful ‘The Boss’ and Lynn Collin’s ‘Mama Feelgood’.

Brown’s other soundtrack, ‘Slaughter’s Big Rip-Off’, isn’t here but making up the sixsome you do get Booker T’s ‘Uptight’ – a 1968 (i.e. pre “blaxploitation-era) sound track to a moody Jules Dassin ghetto movie – and Marvin Gaye’s ‘Trouble Man’ which was badly received on release but has since been upwardly re-assessed.

All six albums in the box have been re-mastered and come with the original art work. They don’t offer a definition of the genre (how could they without ‘Superfly’ and ‘Across 110th Street’ and others?) but together they do present a great snapshot of a genre that’s much loved …. and much loathed in equal amounts!