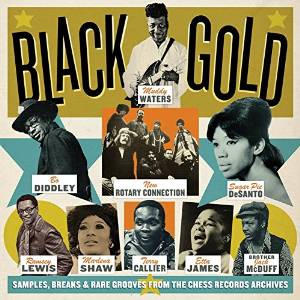 Subtitled ‘Samples, Breaks & Rare Grooves From The Vaults Of Chess Records,’ this 2-CD/42-track collection scours the archives of the legendary Chicago indie label that was founded by Polish émigrés Leonard and Phil Chess in 1950. It’s been lovingly compiled and annotated by noted tastemaker, Dean Rudland (moonlighting from his day job at Ace/BGP), with Chas Chandler and together they’ve done a stellar job.

A younger generation of listeners might recognise some of the tracks here from hip-hop records by Kanye West, A Tribe Called Quest, De La Soul, Cut Chemist, J Dilla, Common, DJ Shadow, and Gang Starr, who’ve all plundered the Chess vaults for a  telling beat, a looped instrumental lick or vocal sample. For groove spotters, then, it’s a cornucopia of riches but for more mature connoisseurs and collectors (like yours truly)  it’s a vivid  aural reminder of the sheer variety of acts and musicians on Chess (and its sister imprints, Argo, Checker and Cadet) that prove that it was much more than a blues label.

Indeed, there’s soul, jazz, and funk aplenty and even a smattering of rock and blues (the latter exemplified by Bo Diddley and Muddy Waters, caught in some of their more adventurous moments). In addition to those two familiar names, there are some other ‘big’ acts (Ramsey Lewis, Gene Chandler and The Dells) as well as a few well-known cuts – Marlena Shaw’s version of the Ashford & Simpson-penned ‘California Soul,’ and New Rotary Connection’s transcendent acid-jazz groove, ‘I Am The Black Gold Of The Sun,’ among them – but mostly, the set highlights some more obscure nuggets; from the funky sax-led jazz of John Klemmer, the bluesy guitar of Jimmy Ponder and the psychedelic Afro-harping of Dorothy Ashby to rowdy, blue-eyed soul man Wayne Cochran and saxophonist Monk Higgins.

With such a smorgasbord of sonic delights, highlights are plentiful and it seems almost churlish to single a few out but having said that, tracks that caught my ear include blues & soul sister Etta James’ ‘Out On The Street Again’ – a slice of Curtis Mayfield-influenced widescreen soul – guitarist Phil Upchurch’s Charles Stepney-arranged instrumental, ‘Black Gold,’ and singer Sugar Pie DeSanto’s perky dancer, ‘Go Go Power.’ Also worth singling out is a slice of symphonic funk called ‘Chocolate Candy’ by the Soulful Strings, Jo Ann Garrett’s Isaac Hayes-inspired take on Bacharach-David’s ‘Walk On By,’ American Gypsy’s deep groove, ‘Inside Out,’ and Brother Jack McDuff’s organ-led, ‘Jelly Jam.’ All good stuff.

Overall, this is exhilarating ride through the Chess vaults with many surprising twists and turns that will excite bonafide crate diggers. Pure gold. (It’s out, by the way, on August 19th)