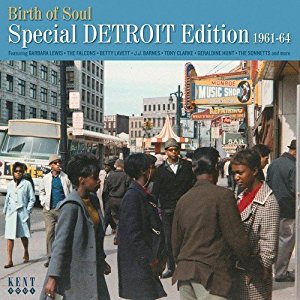 Back in the mid 90s UK reissue specialists Ace/Kent embarked on an ambitious and difficult project. Their compilers and consultants (including at that time pioneering soul commentator, Dave Godin) wanted to track the birth of soul music. Via four compilations, they tried (and by and large succeeded) to pin down the genesis of soul music as it evolved out of R&B, gospel, blues, doo-wop and rock and roll. They also offered a much more specific project … a CD analysis of how Chicago contributed to the birth of soul. We were told that this was the first of several city specific albums. Well, it’s been a while, but the second in that particular series has just been released.

This new ‘Birth Of Soul’ project offers a 24 track insight into how the Motor City helped shape the sound of proper soul music and at the same time it sets out to show that there was much, much more to Detroit than Berry Gordy’s Motown monolith. To make that point the compilers have intentionally ignored Motown product, though the way things were in Detroit in the 50s and 60s (plenty of label jumping and musical moonlighting), there are lots and lots of Motown connections here.

The first track for instance, ‘I Cried For My Last Time’ from the Sonnettes was written by Thelma Gordy while the tambourine player in the Sonnettes was someone called Norman Whitfield. Then there’s the final cut…. The Del Phis’ ‘Nosey Folk’ . Any Motown buff will tell you that the Del Phis were the embryonic Martha and the Vandellas. Both these cuts, by the way, have never been issued before. Other Motown links come via people like Joe Hunter, JJ Barnes, Gino Washington and Popcorn Wylie. And even when the Motown link isn’t named it’s still there, hovering as it were, on plenty of other stuff. Wanda Williams’ ‘Come Back To Me’, for instance, is a dead ringer for Mary Wells’ Motown classic ‘The One Who Really Loves You’.

Motown apart, I guess the most famous track on the set is the Donays’ ‘Devil In His Heart’. famous, of course, because the Beatles covered it…. a tribute to how important soul was in the early days of the beat boom.

Well-known artists on the set include Betty Lavette who here is billed as “Betty Lavett” on her 1963 Atlantic outing ‘Here I Am’ , Tony “The Entertainer” Clarke on ‘It’s Easy (another previously unissued track) and the wonderful Barbara Lewis who offers ‘Think A Little Sugar’, the B side to her career defining ‘Hello Stranger’. Don’t, though, ignore the featured unknowns… artists like The Volumes, The Pen Etts, Priscilla Page and Harry Reid all played a remarkable and worthwhile role in the birth of the music that we all love… soul.