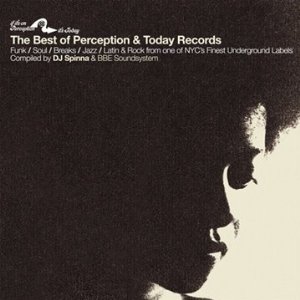 New York’s Perception and Today Records have been badly served by the reissues specialists. The labels – founded in the late 60s by Terry Philips and Boo Frazier – were responsible for some excellent black music – much of it cherished by collectors and crate diggers. One such digger is DJ Spinna who thought the time was right for the world to know more about the Perception set up; hence this 2 CD 30 tracker that chronicles the best of the label’s output.

Owners Philips and Frazier were serious jazzers and originally conceived their labels as an outlet for up and coming jazz musicians. However, they started their business with a real coup; they managed to sign the legendary Dizzy Gillespie – followed by Shirley Horn and James Moody. These jazz stars brought some success to the label but by the early seventies the duo realized that they needed to diversify in order to survive and they signed up soul and funk acts like Black Ivory, J J Barnes, Debbie Taylor and the Fatback Band as well as the rock band King Harvest and radical poetess Wanda Robinson.

All those acts (except the rockin’ King Harvest) and many more are featured here and the result is a varied compilation that offers a great snapshot of the Manhattan music scene in the early 70s. Collectors will be pleased to have Dizzy Gillespie’s in-demand ‘Matrix’; the tune’s been heavily sampled (most notably by the Beatnuts on ‘World Famous’)… but now enjoy the original – heavy and hypnotic. Good too to have music from legendary producer/arranger Johnny Pate. Best-known for his work with the Impressions, here he shows his jazz licks on the main title theme to the ‘Brother On The Run’ movie. Soul fans will be delighted to have a couple of cuts from the legendary JJ Barnes while many of the other featured tracks were early production efforts from Patrick Adams. He worked at Perception with Black Ivory, Madhouse and Bartel and all have contribution here.

Also of considerable interest is input from Astrud Gilberto and Bobby Rydell. The Brazilian star has two cuts – ‘Gingele’ and ‘Take It Easy My Brother Charlie’ while Rydell –trying to throw off his lightweight 60s pop image – offers a heavy ‘Honey Burns’. Equally collectable is the delightful ‘One Life’ from the oddly named jazz-rock group The Albert. Jazzer, James Moody is featured on the track but the real delight is the vocal from Otis Smith … which, in essence, sums up this collection’s appeal – find surprises around every corner.